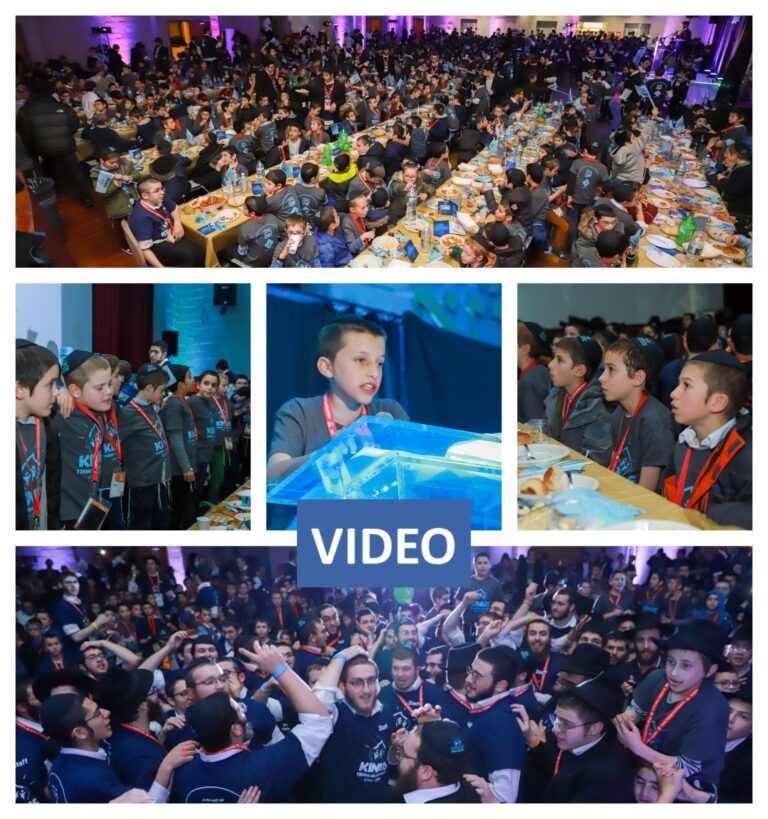 As the three days of friendship, excitement, and inspiration that is the annual Kinus Tzeirei Hashluchim drew to a close this past Sunday afternoon, 1,000 young Shluchim from across the globe took their seats in the Ballroom of Beth Rivka in Crown Heights to enjoy their very own Grand Banquet.

This year’s Grand Banquet followed that of the entire Kinus Tzeirei Hashluchim – ונפלינו, focusing on the joy that a Young Shliach has on Shlichus when he appreciates the special connection he has with the Rebbe.

As the Young Shluchim walked in, a slideshow of pictures from the past few days was in motion on video screens around the beautifully-lit and decorated hall, a reminder of everything they had experienced in such a short time.

The banquet opened with a humorous welcome video of a Young Shliach trying unsuccessfully to get to the Kinus and makes it just in time for the banquet. Master of Ceremonies, Head Counselor Avremi Baron welcomed the Young Shluchim leading into a video of a Niggun being sung by the Rebbe at a Farbrengen followed with the entire room joining in to sing as one with their Rebbe.

The reciting of the Rebbe and Rebbetzin’s Kapital preceded an inspiring story from Head Counselor Sholom Kalmenson, helping the children appreciate the first class ticket they have in this world by being the Rebbe’s Shluchim. A special video was shown, a Sicha about a Jewish child feeling proud that he is special and different than all the other nations.

The Young Shluchim then took to song, going through favorites like “With a Tehillim,” and “Amongst Majestic Mountains”, led by Head Counselor Shalom Cheruff, with music by Chony Milecki. Representing his fellow Young Shluchim was Avrohom Dovid Fox from Pretoria, South Africa who talked about his life on Shlichus, sharing personal stories and inspiration for his friends.

Back to the video screens, the crowd was memorized by a video prepared specially for the Kinus, watching young Shliach Dovid Cunin from Reno, Nevada helping make a friend and his whole family frum by being an example of how a Chossid lives his life.

The program continued with a fascinating ventriloquist show, keeping the entire room spellbound, followed by the reciting of the 12 pesukim. Then, the much-awaited International Roll Call, led by Head Counselor Mendy Plotkin, interspersed with the various niggunim most appropriate to many countries and lively dancing as everyone’s spirits hit peak again.

Children then arranged their tickets in anticipation of the Grand Raffle, led by Head Counselor Menachem Deren, featuring many exciting prizes including sets of Sefarim, Chabad House Chumashim, full-size drones and JEM DVDs.

The grand prize, a full scholarship to the annual Tzeirei Shluchim Winter Camp in Lake Worth, Florida, was taken home by Mendel Rosenfeld from Lisbon, Portugal. Taking place 22 Teves – 2 Shevat/January 19 – 28, the camp is an exciting opportunity to spend 10 days among fellow Young Shluchim in a warm, chassidishe and fun environment in sunny Florida.

Parents arrived to more joyous dancing with special guest Shliach Rabbi Shmuli Sasonkin from Orlando, FL, collecting their sons and checking them out in an organized process to ensure every child was accounted for.

Voices hoarse and spirits high, the Young Shluchim headed home, motivated and excited to continue their Shlichus. Each Young Shliach left the Kinus with a special gift, a DVD titled “Never Alone”, as a momento from the Kinus Tzeirei Hashluchim.

“The annual banquet is always a highlight for the young Shluchim,” says director Berel Bendet. “This year’s unprecedented program is sure to give them the inspiration and energy needed for the whole year.”

A full replay of the live broadcast of the Banquet is available below.

The annual Kinus Tzeirei Hashluchim is a project of The Shluchim Office, led by Rabbi Gedalya Shemtov.