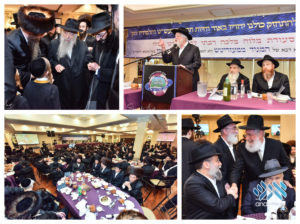 Heichal Menachem of Boro Park held their annual Yud Tes Kislev melave malka this past Mozei Shabbos, with the largest crowd to date gathering to celebrate the Alter Rebbe’s geulah and mark the yartzeit of the Maggid.

The event was emceed by Rabbi Zev Katz and niggunim were sung by Yossi Cohen and the Kapelya choir.

The director of Heichal Menachem, Rabbi Leibel Altein welcomed the attendees and thanked R’ Sholom Ber Drizin, R’ Moshe Drizin, and R’ Shaya Boymelgreen who support Heichal Menachem the entire year and are the main sponsors of the melave malka.

The melave malka was followed by a farbregen with Rabbi Wagner and Harav Yoel Kahan, the Rebbe’s choizer, with tens of participants staying hours after the official program was over.

At the hall was also a sale of sifrei Chassidus at subsidized prices with a focus on seforim with explanations to assist first-time learners of Chassidus.

Each participant received a booklet containing Perek Mem Alef of Tanya from the upcoming volume 7 of Chassidus Mevueres Tanya.