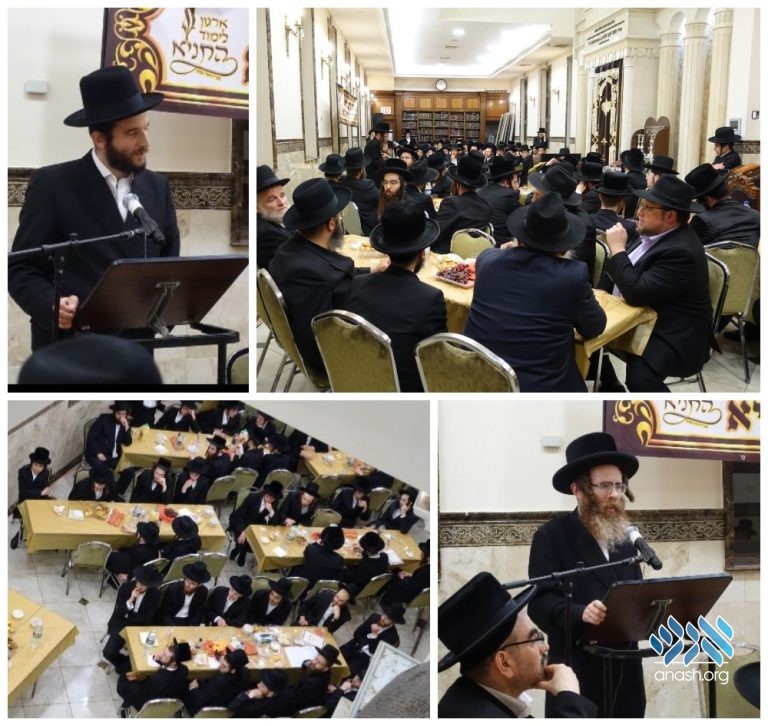 For the past three years, Irgun Limud HaTanya shel Heichal Menachem, run by Rabbi Yoel Naparstek, has been operating in Boro Park. Hundreds of young men study Tanya with explanations in Chassidus and take exams on the material covered.

Culminating three years of learning, the organization held a beautiful siyum, attended by dozens who have been influenced by the program.

Director Rabbi Asher Friedman addressed the audience, focusing on the organization’s goal of awareness of Hashem to penetrate a Yid’s consciousness. Learning Tanya has brought incredible light in the lives of so many, he said.

Dayan Shmuel Yehuda Zilber of Kehillas Emunat Yisrael then contrasted the approach of the Alter Rebbe with other forms of Chassidus. The influence that Chassidus Chagas has varies, since its effect is a result of ‘talking’ to the neshama. The neshama’s ability to be mekabel depends on the auspiciousness of the time and the amount of preparation made.

Chassidus Chabad however, as taught by the Alter Rebbe, and others as well, speaks to the mind, which in turn influences the nefesh habehamis itself.

Last at the podium was an avreich who completed his third year as part of Irgun Limud HaTanya, and expressed how his studies have brought new light into his avodas Hashem.

All graduating students then received a special tshura containing the Ksav Ha’eidus written by the Alter Rebbe during his imprisonment, as well as an application of Tanya’s 26th chapter to the present world situation.

Special thanks was given to the Karnowsky family for their dedication leiluy nishmas their son Shmuel.

Irgun Limud HaTanya currently operates in six cities and has seen incredible success. To bring it to your area, email [email protected].