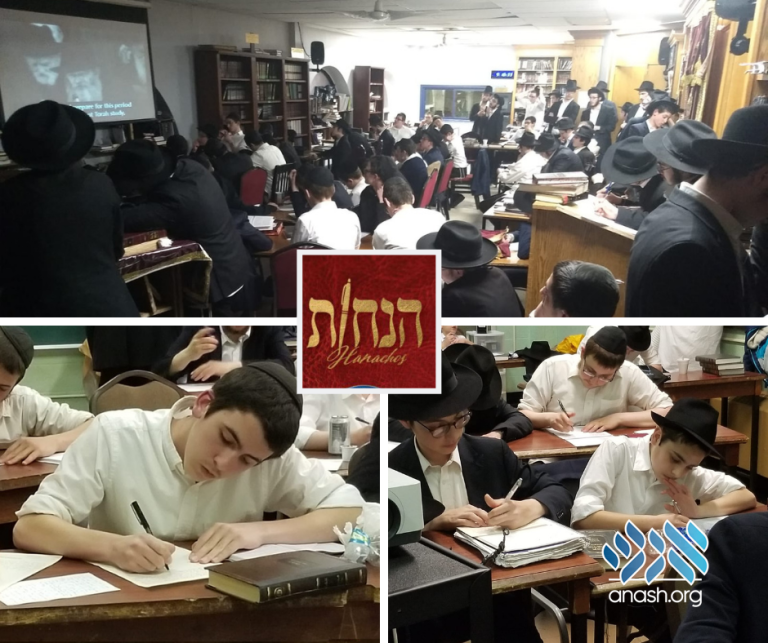 As Gimmel Tammuz approaches, we are all united in our desire to strengthen our connection with the Rebbe. Lubavitch mesivtas around the world have channeled this desire into action.

“Hanochos,” a new program aimed at encouraging mesivta bochurim to watch farbrengens of the Rebbe and understand what the Rebbe is saying, has been launched by the Vaad Hatmimim – in conjunction with JEM – for six selected mesivtas.

The program is designed to enable a bochur who hasn’t yet watched a full farbrengen, or any long video of the Rebbe, to be able to focus through the Rebbe’s farbrengen and understand what is being said- all by the end of the six week program.

Those participating in Hanachos will be viewing a video of the Rebbe twice a week, beginning with ten minute videos and increasing the length each week by ten minutes. During the final week, bochurim will view an hour long video; throughout the program, there will be a total of 12 viewings adding up to 7 hours of the Rebbe’s farbrengens.

After each viewing, the bochurim will write down their own hanacha on the video shown. The hanachos will be marked, and those who pass all twelve hanachos will automatically receive a gift of $100 to spend at Kehos, which will be given out at the closing event on Gimmel Tammuz in Crown Heights. The top three finalists will win a ticket to go to the Rebbe’s father’s tzion in Alma Ata for Chof Av.

The top three hanachos of each week will be featured in the new Hanachos magazine, along with articles and interviews about participating in and watching the Rebbe’s farbrengens.

Vaad Hatmimim’s Hanachos program is organized by Rabbi Tzvi Altein, together with Tzvi Alperowitz and Boruch Ceitlin. Shluchim in the participating mesivtas– Chicago, Detroit, New Haven, Oholei Torah, Toronto and Tzfas- play an integral role in facilitating the program in their respective yeshivos.

This project was put together with much assistance from Arik Shemtov, and with constant support and encouragement from Rabbi Zalman Oster, menahel of Mesivta Lubavitch Toronto.