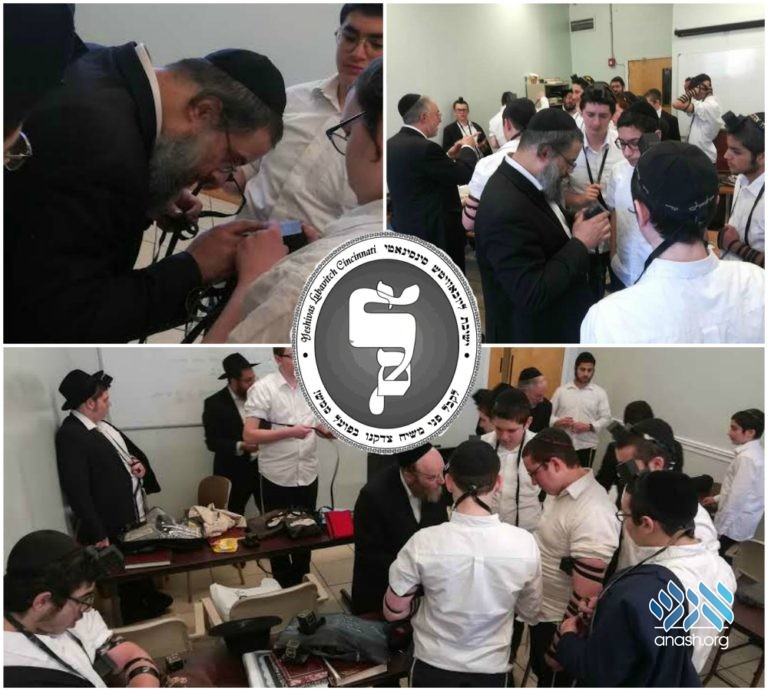 Yeshivas Lubavitch Cincinnati, under the leadership of Rabbi Gershon Avtzon, was visited the the TAP (Tefillin Awareness Program) team who showed them how to correct important issues in their Tefillin.

Yeshivas Lubavitch Cincinnati, under the leadership of Rabbi Gershon Avtzon, was visited the the TAP (Tefillin Awareness Program) team .

The TAP Team, directed by Rabbi A Schachter, includes a expert Sofer and a expert Batim Macher. They visit – for a minimal fee –  Yeshivos, Shuls and Batei Midrash all across the country. They check to make sure that the tefillin are being worn in the right place and that the Batim and Retzuos are all Kosher.

While checking the Tefillin of the Bachurim, many halachik issues were found and some were able to be fixed on the spot.

Examples of Halachik issues that were found:  1) A Sofer that had checked a Bachurs Tefillin and mistakenly painted the bottom of the Bayis, thus making it a Chatzitza. 2) Many of the Tefillin were not sown up tightly – thus creating issues of “Ribua” – the requirement for Tefillin to be square. 3) Some bachurim has chips in the Bayis from Tefillin falling and had to be repaired. 4) Many Bachurim had their Tefillin set below their hairline. 5) Many Retzuos were worn out and needed painting.

The Yeshiva thanks Mr. Yosef Zoiman – a local community askan – for arranging the visit.