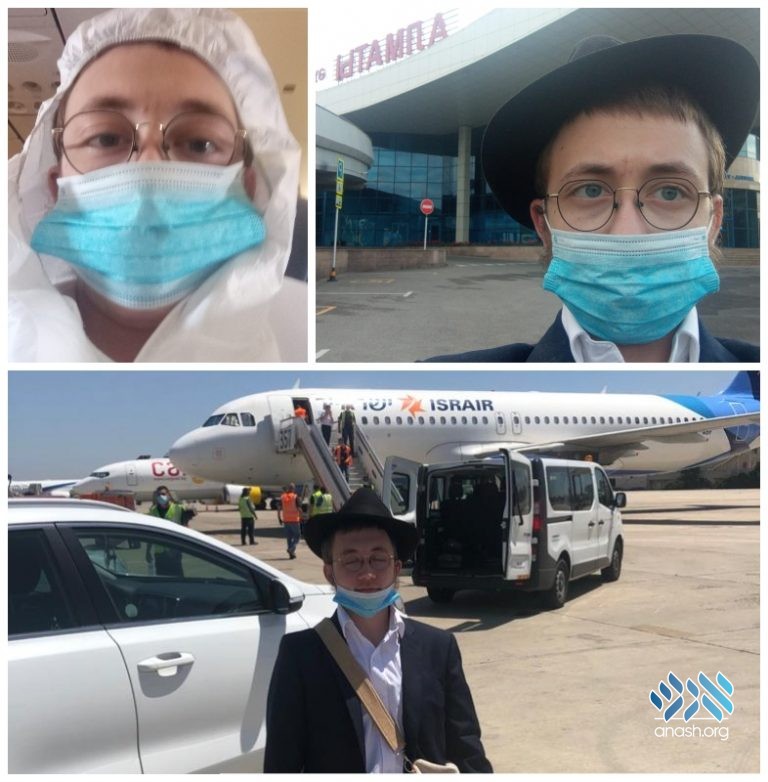 It took a travel agent from Crown Heights, an international WhatsApp group, and the CEO of Israir Airlines to rescue an Israeli bochur who got stuck in Kazakhstan without a valid passport.

In a true display of ahavas yisroel, an international effort spanning continents arranged the rescue of an Israeli bochur stuck in Kazakhstan.

The story began at the beginning of the winter when Tzviki Cohen, a Lubavitcher bochur from Eretz Yisroel, traveled to Kazakhstan to help out the local shluchim. But after only a few months the coronavirus reached the country and Tzviki wanted to head back home.

Preparing to leave, he checked his passport and realized that it had expired. Immediately, he realized he had a serious problem at his hands. With government offices closed worldwide, his passport could not be renewed, and he could not travel. Making it worse, his visa was expiring as well, and if he did not leave the country he would be considered an illegal alien and was subject to arrest.

Realizing the severity of the issue, Crown Heights travel agent Shmulik Kravitsky of Sky2000 was contacted to see if he could help. While making his own efforts, Shmulik also posted the story on a international WhatsApp group for travel agents, to see if anyone else could do anything.

It was then things started to fall into place.

Mr. Uri Sirkis, CEO of Israir Airlines, who is on the group, read the message, understood the severity of the issue, and decided to get personally involved.

Sirkis told Kravitsky that in the framework of Israir’s special coronavirus operations, they had a plane on his way to China. On the return flight, he told Kravitsky, he will have it take a stop-over in Alma Ata, Kazakhstan, pick up the bochur and return him to Eretz Yisroel.

Sirkis requested that all the paperwork be taken care of, and the bochur be in the airport at the designated time. He said Israir would take care of all the bureaucracy and permits needed to bring him on the cargo flight.

However, in the meantime, further difficulties began piling up, and the long-awaited approval from the aviation authorities were not obtained in time.

The plane was already on its way back from China to Israel with the cargo, and still no permits. The complex operation was sadly suspended.

Last night, another Israir cargo flight again went to China. Instead of tring to have the bochur fly out like a passenger, Israir arranged for the bochur to register as a flight crew, thereby allowing him to travel without issues.

While the logistics were being planned, Tzviki went to daven by the Ohel of Harav Levi Yitzhak Schneerson, the father of the Rebbe, for the success of his rescue, before continuing on to the Alma Ata airport.

On Wednesday, after months of tension and weeks of planning, Tzviki finally landed in Eretz Yisroel.