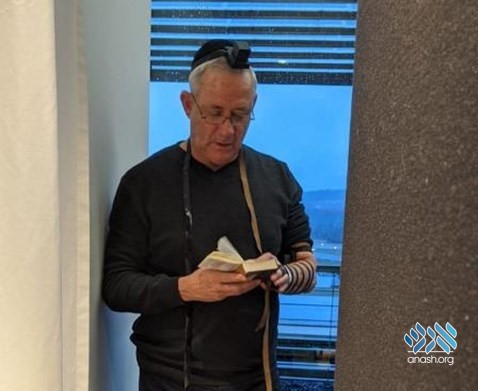 On his return flight from the White House, Israeli PM candidate Benny Gantz met a frum Jew in Zurich airport and borrowed his tefillin.

Benny Gantz, the Israeli opposition leader, apparently was in such a hurry to return to Israel this week that he forgot his tefillin. He borrowed a pair from the owner of a seforim store in Boro Park who happened to be with him on his flight from JFK airport.

Gantz, the chairman of the Blue and White party, had been in Washington Monday for a meeting with President Trump ahead of the White House’s unveiling of the long-awaited peace proposal. While in Zurich for a stop, he met the owner of Zundel Berman Books.

Yochonon Berman, who also has stores in Lakewood, Flatbush and four other locations, told boropark24.com that he was in the Swiss airport’s business lounge when he spotted Gantz.

“I bumped into him and I asked, ‘Are you Benny Gantz?’ and he said yes,” said Berman, who added that the former Israeli general was unaccompanied, aside for several bodyguards. “Afterwards, he saw me going into the side room to daven so he came over to me and asked if he could put on tefillin.”

Berman gave him his pair of tefillin and said that Gantz donned it himself, apparently familiar with what to do. “He said Shema and Shemoneh Esrei and gave it back,” Berman said.

Gantz had been returning to Israel to lead the effort to deny Prime Minister Binyamin Netanyahu immunity from prosecution. By the time he arrived home, Netanyahu had withdrawn his request and the attorney general filed an indictment against him.