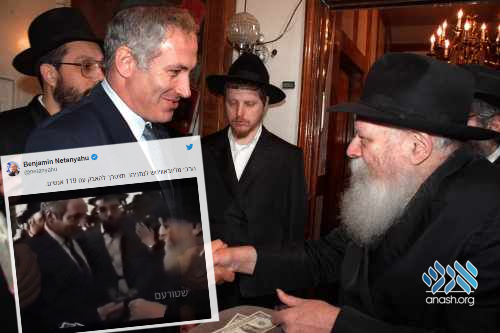 Prime Minister Bibi Netanyahu tweeted a video of his meeting with the Rebbe during which the Rebbe told him “you will need to fight 119 [Knesset members].”

Prime Minister Bibi Netanyahu tweeted today (Monday) a video of his meeting with the Rebbe on his official Twitter account. The Rebbe’s words are especially timely now, in light of Netanyahu’s struggle for his political and personal future.

“You are at the beginning of the post,” the Rebbe told him in 1988, when he decided to enter the political arena in Israel, “and you will have to fight against 119 people. You will certainly not be impressed by this, because Hakadosh Baruch Hu is on this side. “

The Rebbe continued, “Hatzlacha Rabba. I had a great deal of nachas from your first speech. May it continue with this path, and Hashem helps all who want to purify others; all the more so when you start with “קשוט עצמך” – examining yourself.”

Netanyahu responded, saying to the Rebbe, “I intend to continue on this path. I am well aware of the Rebbe’s message.”