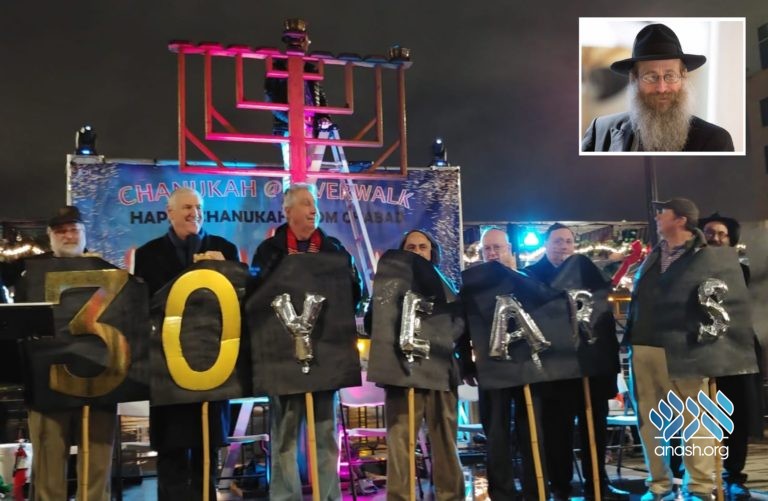 A crowd of 500 braved the rain to pay tribute to shliach Rabbi Dr. David Kaufmann a”h, founder of the annual Chanukah at Riverwalk in New Orleans.

New Orleans, Louisiana is known for many things; conventionality is not one of them. It should come as no surprise, then, that any gathering involving the local Jewish community features some unique practices. Take, for example, the ‘second line parade’ following Sunday evening’s menorah lighting. In an unconventional display of Jewish pride, the crowd marched through the streets, led by a jazz band playing popular Jewish tunes.

Rabbi Dr. David Kaufmann, a”h, was as unique as the community that gathered on the first night of Chanukah to pay tribute to him. Dr. Kaufman served not only as a shliach to Tulane University, but as a professor of English Literature and Jewish studies as well. He and his wife Mrs. Nechama Kaufmann had a profound influence on hundreds of Jewish students who studied there.

A prolific author and poet, Dr. Kaufmann wrote a number of books, as well as the main article in the L’chaim Weekly for eight years. He founded and coached the local Jewish day school’s chess club, all while immersing himself in the study of Chassidus.

Dr. Kaufmann was widely known throughout New Orleans for his role in establishing and directing the annual public menorah lighting on the Mississippi River. On Sunday, the community braved the rain to celebrate thirty years since the first Chanukah at Riverwalk, and to honor its founder.

“Thirty years ago, in 1989, David Duke was running for statewide office in Louisiana,” Mrs. Chana Hellinger shared in a moving tribute to her father. “Chabad of Louisiana, under the direction of Rabbi Zelig Rivkin, had been talking about having a public Menorah lighting in New Orleans. My father of blessed memory, Dr. David Kaufmann, who was coordinating the Menorah lighting, approached the Director of the Riverwalk Merchants Association.

“John [the director], who was African American, embraced the idea. He said that our two communities must stand together against bigotry and hatred. And so the concept of Chanukah at Riverwalk became a reality. 30 years later, David Duke is just a foul tasting memory for Louisiana. But Chanukah at Riverwalk is an annual proud moment for New Orleans.”

Rabbi Saadya Kaufmann of Houston, Texas, shared a story he had heard from his father illustrating the annual lighting’s impact. “One winter afternoon about 18 years ago, an elderly Jewish guest staying at the Hilton Riverside hotel walked out onto the streets of New Orleans. Upon leaving the hotel something caught his ear. It was the sound of music. He followed the music across the street car tracks and into the Spanish Plaza at the Riverwalk. As he neared the plaza he realized that it was Jewish music.

“Upon entering, he gasped as he beheld a beautiful Menorah standing tall with hundreds of people waiting for the lighting to commence. Overwhelmed with emotion he burst into tears. As he calmed down he sought out my father, Dr. David Kaufmann, the event organizer, and explained the reason for his emotional reaction.

“’I am a survivor of the Holocaust. I can never forget how we were hunted as Jews in Nazi Europe. Seeing Jews, my people, publicly celebrating our holiday in a display of Jewish pride, has moved me deeply… This has been a real healing experience and I cannot thank you enough for hosting this event.’”

Following the tribute, shliach Rabbi Mendel Rivkin led a beautiful ceremony featuring eight dignitaries and a message relating to each flame of the menorah. Rabbi Yosef Kaufmann of Johannesburg, South Africa sang the brachos as the menorah was lit, after which the crowd celebrated thirty years of Chanukah at Riverwalk with a magnificent fireworks show.