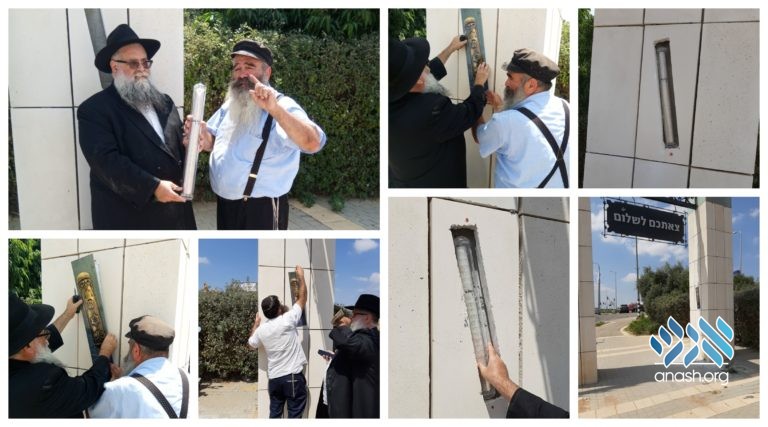 Sderot has been a city that has been under rocket attack for years. Decades, almost. All through that time, the shluchim have been in the western Negev city to offer the support that the shellshocked residents need. Now, residents have an extra source of protection, in the form of a giant mezuzah posted at each of the two city entrances.

The Mezuzos were donated by Sderot resident and former long-time Crown Heights resident Yossi Bruk, who recently moved back to Eretz Yisroel and settled in Sderot. The former Crown Heights Vaad HaKohol member and Vaad HaKashrus head’s donation of the half-meter scrolls are estimated to have cost about NIS 6,000, or 1,700 dollars.

When asked why he chose to donate Mezuzos to the city, his response was very simple. “When we arrived here we saw that they had built gates to the city. So we immediately realized that gates like these definitely need mezuzos – which are “Shomer Dalsos Yisroel” = protect the doors of Yisroel. So, on my birthday, 9 Elul, the day on which my mazel is gover, we decided to donate these beautiful mezuzos,” Mr. Bruk, said. “Now the city will be protected and no harm will befall it,” he added.

Bruk says the question isn’t why he made “aliya,” but, rather, why he left Eretz Yisroel in the first place. “We traveled to America to be near the Rebbe. After 42 years there, we felt that we’d spent every minute we could there, and it’s time to come back,” Yossi said. So we sold our home to a chassidishe family, packed up and came back home,” he said.

But why move to Sderot, of all places? “Simple,” Yossi says. “My daughter is on shlichus here, so if we’re going to move to Eretz Yisroel, why not be close to our daughter and the eynikalch?”