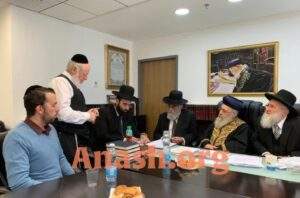 A special Beis Din assembled by Sefardic Chief Rabbi HaRav Yitzchak Yosef to address the status of the two Israelis killed in the Ethiopian Airline tragedy, has instructed the family of both victims to sit Shiva and begin observing laws of Aveilus. The wives were also ruled as not being Agunos, and are free to marry again.

Officials in the office of the Sefardic Chief Rabbi announced on Tuesday that the ruling was made in conjunction with officials of the Foreign Ministry, the Interior Ministry and ZAKA, to address the Halachic status of those who perished on Ethiopian Airlines flight ET302.

The Boeing 737 MAX crashed shortly after takeoff from Addis Ababa, killing all 157 passengers and crew on board. There were passengers from 35 countries on board, many of whose bodies have not yet been recovered despite efforts by ZAKA, which sent a recovery team to the crash site.

The Israeli victims in the Ethiopian Airlines crash have been identified as Avraham Matzliach Z”L, 49, from Maale Adumim, and Shimon Daniel Re’em Z”L, 55, from Zichron Yaakov. The families of the two turned to the Israeli Chief Rabbinate to determine if they should sit Shiva or not.

Present for the session were Prof. Shlomo Mor Yosef (Director of the Population Registration in the Interior Ministry), attorney Odelya Edri (from the legal office of the Population Registry Office), Mr. Eyal Suisso (Head of the Consular Division in the Foreign Ministry), Mr. Rubi Shemesh (senior Interior Ministry official), Yehuda Meshi-Zahav (Head of ZAKA) and ZAKA members who were part of the team operating at the crash site.

Along with the Av Beis Din Rav Yosef are Dayan Rav Michael Amos and Dayan Rav Yaakov Rosa. ZAKA volunteer Mr. Eliezer Samet, who also operated at the scene, provided the beis din with a great deal of information, as did Mesh-Zahav.

The beis din was presented with documents that were found on the site of the crash, as well as a number of documents that directly link to the Israeli victims, and airline documents from the scene. The was also a passenger manifest including the names of the Jews who were on board the plane, and the testimonies of Jews who saw the Israeli victims boarding the doomed flight. The relevant documents were presented to Rav Yosef and the other dayanim.

After hearing testimony, reviewing documentation pertaining to the crash, the beis din informed the families of Shimon Daniel Re’em and Avraham Matzliach to sit shiva and begin observing laws of aveilus. The appropriate psak was also released to declare the wives are widows and are free to remarry in the future.