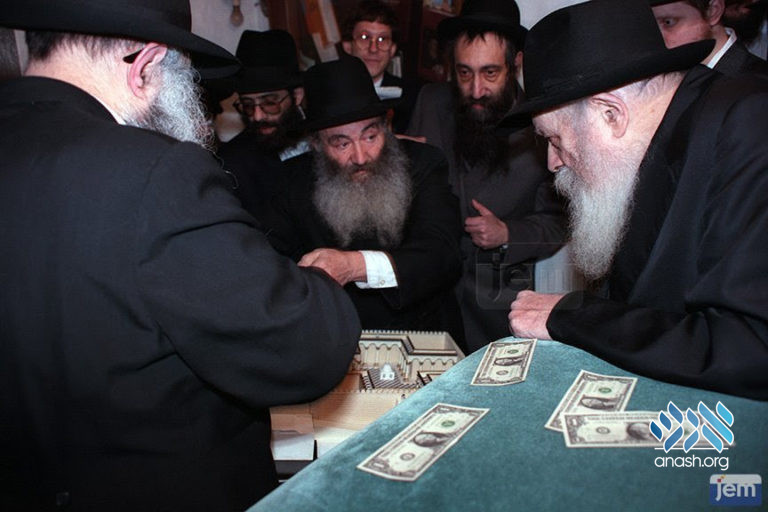 Rabbi Yisroel Dov (Ber) Levanoni (Weisz), a longtime Yerushalayim resident, known for the miniature model he created of the Bais Hamikdosh which he showed to the Rebbe, passed away on Wednesday, 20 Av, 5779.

Rabbi Levanoni was born in 5682/1921 in Munkatch, then part of Czechoslovakia, to Moshe and Sheindel Weisz, both of whom perished in the Holocaust. He lived through the war, and managed to keep Torah and Mitzvos even while in the concentration camps. After the war he went up to Eretz Yisroel, where he married his wife Sara Fruma, and settled in Yerushalayim.

In Eretz Yisroel, Reb Yisroel Dov had the zechus of serving the late Belzer Rebbe, Reb Aharon Rokeiach, by taking care of the Belzer Rebbe’s teeth. He later used the knowledge he acquired in the dental field to learn about scale models, using that knowledge to build his Beis Hamikdosh model.

In 5747/1987, he began working on a miniature scaled model of the Bais Hamikdosh. It was based on the Rambam’s specifications, and many experts were consulted to ensure that the measurements were accurate.

Just before Chof Zayin Adar 5752/1992, Reb Yisroel Ber brought his replica to the Rebbe in New York, and passed by the Rebbe for a dollar on Sunday, the 26th of Adar. The Rebbe looked at the model and noted that the ramp to the Mizbeiach was too short. Startled, Rabbi Levanoni tried to explain his calculation, but the Rebbe insisted that it was off. After reviewing it again, Reb Yisroel Ber discovered that it was a mere three millimeters off!

Rabbi Levanoni was shocked that the Rebbe had noticed this error, even though many experts, including himself, had reviewed the specifications many times before building it.

He would host visiting groups at his home, explaining to them the intricacies of the model.

He is survived by his wife Sarah Fruma, and his children: Avrohom Moshe – Boro Park, Meir Yakov – Kfar Chabad,