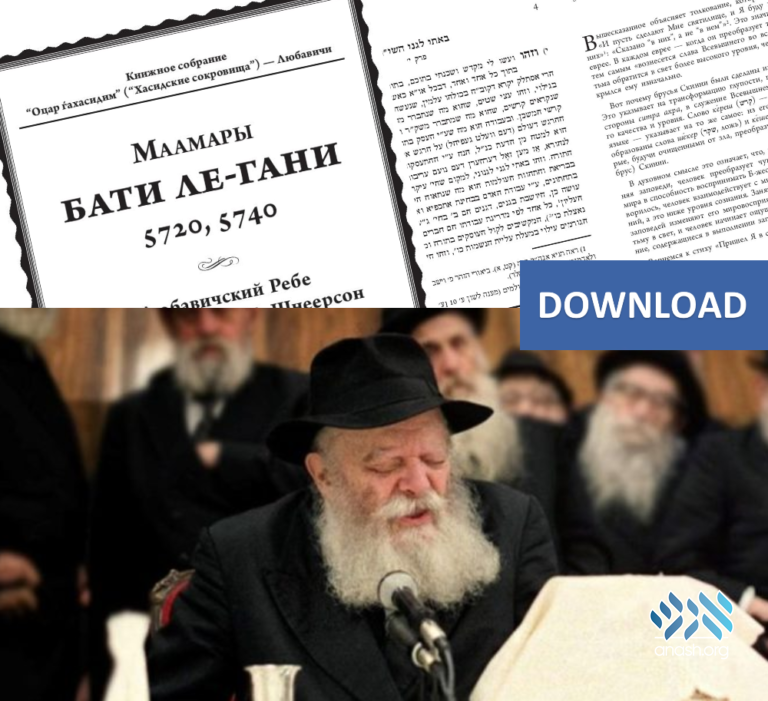 In honor of seventy years since Yud Shvat 5710, F.R.E.E. Publishing House published the Chasidic discourses of Bosi Legani in the Russian language along side the Hebrew text.
The book contains the 10th chapter of the initial 5710 Maamor of the Previous Rebbe and the Maamorim of 5720 and 5740 of the Rebbe.
These translation’s are part of an ongoing project to translate all of the Maamorim on Bosi Legani into the Russian language.
F.R.E.E. thanks Rabbi Yehuda Davidov, for sponsoring this project, and making these Chasidic discourses available in the Russian language, enabling Russian readers worldwide, to study the Rebbe’s teachings.
*
The ma’amarim were said by the Rebbe in 5720 and 5740 (1960 & 1980) and is based on the tenth chapter of the Previous Rebbe’s ma’amar Basi L’Gani from 5710 (1950).
The Previous Rebbe wrote a four-part series of ma’amarim based on the verse “Basi L’Gani”, each ma’amar consisting of five chapters, for a total of 20 chapters.
The Previous Rebbe completed the hemshech for publication and instructed that the first part should be distributed on Yud Shvat 5710 (1950) for the yartzeit of his grandmother and provided specific days to distribute the following sections.
On that Yud Shvat 5710, the Frierdiker Rebbe passed away.
(The second section, which concludes with chapter ten – this year’s chapter – was distributed on 13 Shvat 5710, the yartzeit of the Previous Rebbe’s mother.)
When the Rebbe accepted the leadership one year later on Yud Shvat 5711 (1951), the Rebbe said a ma’amar (Basi L’Gani) which explained this ma’amar of the Previous Rebbe. This was the first of 38 years in which the Rebbe said a Basi L’Gani ma’amar; these ma’amarim followed a twenty-year cycle of explaining each of the 20 chapters of the Previous Rebbe’s  Ma’amar. Each year, the Rebbe first reviewed the key points of the Frierdiker Rebbe’s ma’amar before going into a detailed explanation of each year’s chapter.

These ma’amarim are based on the pasuk from Shir HaShirim (5:1) which metaphorically refers to Hashem’s relationship with the Jewish people.
*
May the translating of the teachings of Torah and Chasidut into the Russian language be another step of transforming the world into a place where Hashem feels “at home”, may Hashem’s essence “come back” to be “at home” in our physical world like it was initially present when the world was first created.