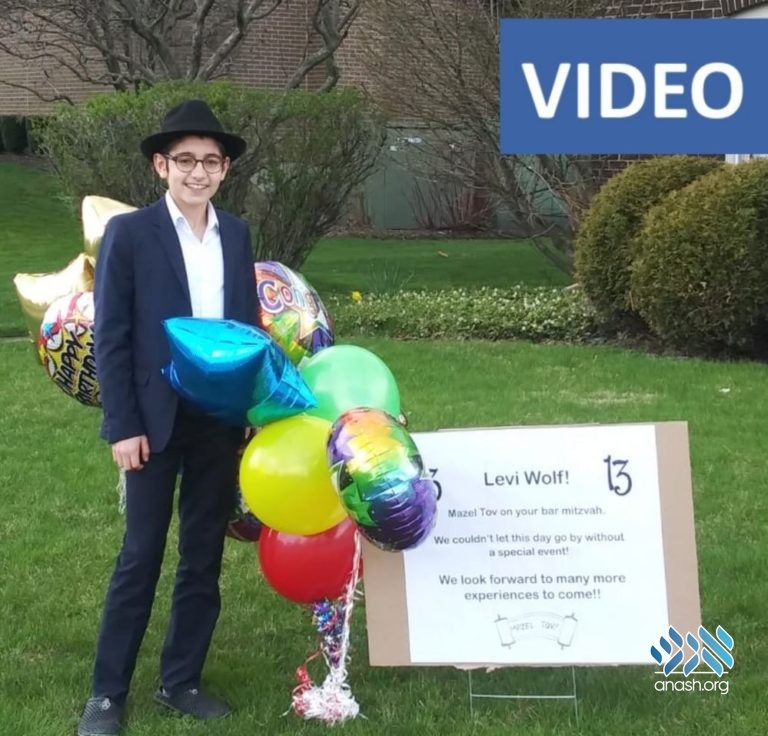 When Levi Wolf of Lincolnwood, Illinois had to change his bar mitzvah plans due to the coronavirus, his friends and family found a way to celebrate with him – from a distance.

What is it like to celebrate your Bar Mitzvah under lockdown? While every boy who marked this occasion in the past few weeks may describe the experience differently, there is one thing they all have in common: their special day was worlds different than what they had envisioned.

Levi Wolf of Lincolnwood, Illinois is no exception. He and his family had it all worked out- fly to New York for an aliya, then back to Chicago to celebrate with friends, family and community.

“It’s hard to describe the feelings of a bar mitzvah bochur who suddenly finds out he won’t be davening for the amud, celebrating in person with his friends and family, or being called up for an aliya in the Rebbe’s room,” Rabbi Moshe Wolf, Levi’s father, told Anash.org. “It’s difficult, to say the least.”

Thankfully, Levi has many people in his life who weren’t going to let the day pass by without finding a way to be part of his simcha. When his aunt Mrs. Chaya Mushka Berman realized that all the family’s original plans would be canceled, she got to work organizing a surprise parade to pass by Levi’s house before his Zoom celebration.

Levi is lucky to live near much of his father’s family, including grandparents, aunts, uncles and cousins. After reaching out to them, Mrs. Berman and her mother, Mrs. Libby Wolf, invited his classmates and the members of their shul, Congregation Yehuda Moshe, to join the parade.

On Tuesday morning, a long procession of cars drove down Kostner street, its passengers blaring lively music and calling out warm wishes of mazal tov to the bar mitzvah boy and his family.

While Levi’s parents knew that their family would be driving by, the participation of community and friends was a heartwarming surprise. For Levi, the whole parade was an unexpected treat.

“When the community came together to celebrate Levi in this way, it made him feel so special,” said Rabbi Wolf. “The parade added so much to the simcha, and seeing that people cared enough to organize it made a big difference to him.”