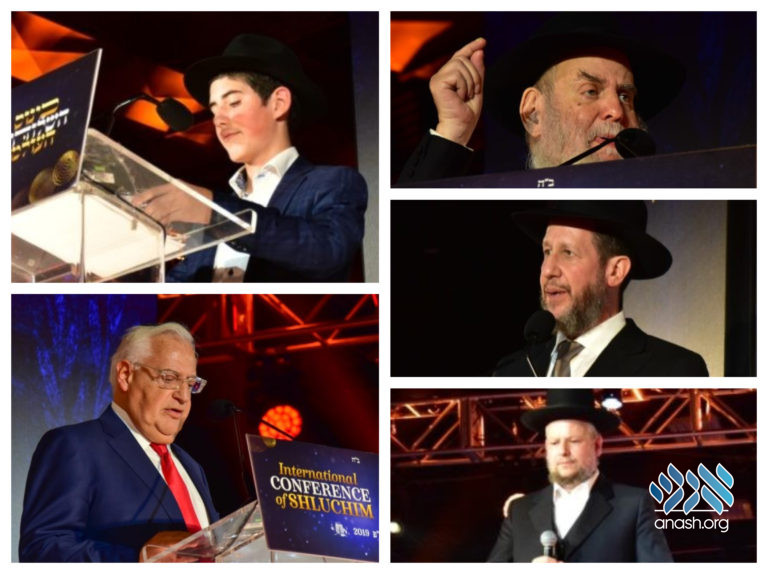 The Kinus Hashluchim 5780 Gala Banquet celebrated the milestone of surpassing 5,000 shluchim sent out across the globe.

The New Jersey Expo Center has been transformed for the occasion; close to 600 tables have been set up for the 5,800 guests. Those gathered this evening have come to celebrate 5,067 shluchim couples and those who have partnered with them to build 3,500 Chabad institutions.

As the number of shluchim grows and their impact on the world spreads, the world is taking note of how far the Rebbe’s vision has reached. What started as a small ‘army’ with a handful of shluchim has grown into a force of thousands across 100 countries and 6 continents, including all 50 of the United States.

Tonight, the crowd hears words of inspiration and encouragement from major personalities who are known across the globe. They also hear from ordinary shluchim who have done extraordinary things. They sing, and dance, and applaud, and exchange brochos with friends they’ve known forever and brothers they’ve never met.

At the end of the Kinus, each participant will return to his own corner of the world, ready to take on his surroundings, knowing that he does not go alone.

The Rebbe’s kochos accompany every shliach, every mechanech, every supporter, each of his chassidim home.

Watch the replay on Anash.org.