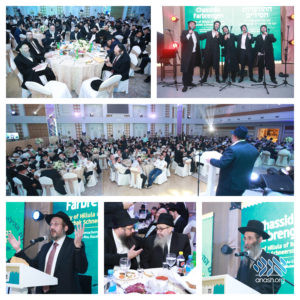 A grand banquet, followed by a farbrengen, took place Wednesday evening in Alma Ata’s Ramada Hotel, concluding the program in honor of the seventy-fifth yahrtzeit of the Rebbe’s father.

The evening was accompanied by the Malchus Choir who sang soulful nigunim. After the banquet, a farbrengen was held with the rabbonim and mashpiim, which conitnued into the wee hours of the night.

The Alma Ata program was arranged by Fleishman Productions.