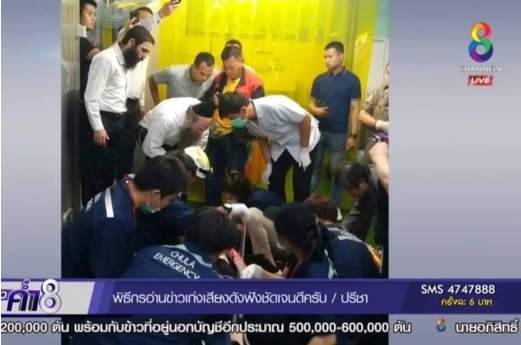 In a miraculous operation, Rabbi Nechemia Wilhelm, the Rebbe’s Shliach to Bangkok, helps save a trapped woman from near death.

In a recent post on social media, Rabbi Nechemia Wilhelm, the Rebbe’s Shliach to Bangkok, shared the harrowing details of a terrifying story that B”H ended well.

It was an ordinary Friday when he received a phone call from a stranger in Toronto. The man said that his parents had arrived in Thailand on Thursday afternoon. His mother had gone for a walk that evening but had not been seen or heard from since.

“I immediately went with my security officer to the hotel, and we took the husband of the missing woman to the police station. The police officers came with us and began searching the vicinity of the hotel and checking footage from the hotel cameras.

“After about an hour of searching with the assistance of tens of police officers, we found her in a narrow shaft near the hotel pools. The shaft was about 3 meters deep, next to the refrigeration rooms of the hotel.

But the drama was not yet over. Given the shape of the pit, the rescue teams could not extract the woman. It was decided that they would have to cut into the refrigeration rooms.

Having successfully done so, they found the trapped woman unconscious. An ambulance transported the woman to a local hospital where she regained consciousness. Miraculously she had no major injuries or broken bones, and she was released soon after.