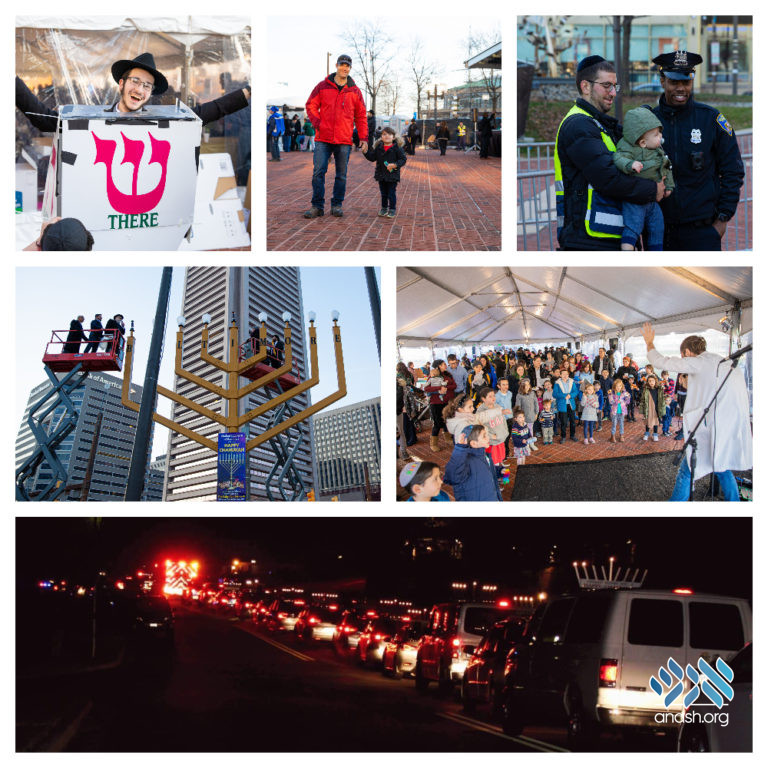 By Isaac Draiman for BaltimoreJewishLife

Chabad-Lubavitch of Maryland has been hosting the public menorah celebration at Baltimore’s Inner Harbor for over 30 years, but weeks after the horrific antisemitic shooting in Jersey City, it was celebrated by a record number of Jewish participants eager to stand together and face down growing anti-Semitism throughout the United States and the world, with a defiant dose of Jewish pride as the first night of Chanukah commenced on Sunday, Dec. 22.

The recent rise in hate speech and hate crimes nationwide, including deadly shootings in Pittsburgh, Pa., Poway, Calif., and most recently in Jersey City, N.J., was met with the largest turnout ever as well as a bipartisan show of support by public officials to take a stand against hate in a show of Jewish pride and unity.

“Chanukah is the celebration of light over darkness,” said Rabbi Shmuel Kaplan, who directs Chabad Lubavitch of the Maryland Region. “The darkness that we, as a nation, have been experiencing must be fought with light and goodness, and we are putting together our biggest program ever to show that we will not be intimidated by those who wish to scare us.”

Well over 500 people gathered in McKeldin Square for a comprehensive Chanukah celebration that included programs geared to adults and children. The event began with Chanukah-themed booths featuring activities including menorah art making, Chanukah cookie decorating, Chanukah face paint, and science activities by The Science Guys, who were also featured in a show for children.

In his address, Lt. Gov. Rutherford focused on Maryland’s close connection to the Jewish people and Israel, and expressed his hope for a continued spirit of mutual respect and admiration. Mayor Young shared an insight about Chanukah, explaining how the small band of Maccabees who defeated the might Syrian-Greek army of Antiochus remind us that even if you’re small, you can make all the difference.

Rabbi Kaplan shared his feelings of encouragement and hope at seeing the enormous crowd of attendees, expressing his hope that this would be the beginning of the resurgence of Baltimore’s Jewish community and the city of Baltimore as a whole.

The event, a project of Chabad centers that make up Chabad-Lubavitch of Baltimore, was organized by Rabbi Sholom Reindorp, director of Jewish Inmate and Family Services of Maryland.

The public menorah lighting is part of the worldwide Chanukah campaign, an initiative launched by the Rebbe, Rabbi Menachem M. Schneerson, of righteous memory, in 1973. The campaign highlights and encourages the central theme of the holiday — publicizing the story of the Chanukah miracle.

In this vein, Baltimore’s annual car menorah parade this year drew over 60 menorah-adorned vehicles, who spread the light of Chanukah throughout the city’s streets, distributing menorah kits and holiday cheer as they went. The parade was organized by Rabbi Chesky Tenenbaum, director of Jewish Uniformed Service Association of Maryland, and was made possible through the coordinated efforts of Baltimore City and County law enforcement, led by Baltimore City Police Major Corbett, Sgt. Smith, and Sgt, Currie; and Baltimore County Police Major Landsman, Cpt. Rogers, and Lt. Dicara.

The parade concluded at Market Maven, a prominent local kosher supermarket, where once again the menorah was lit, traditional Chanukah treats were enjoyed, and joyous Chanukah music echoed into the night.