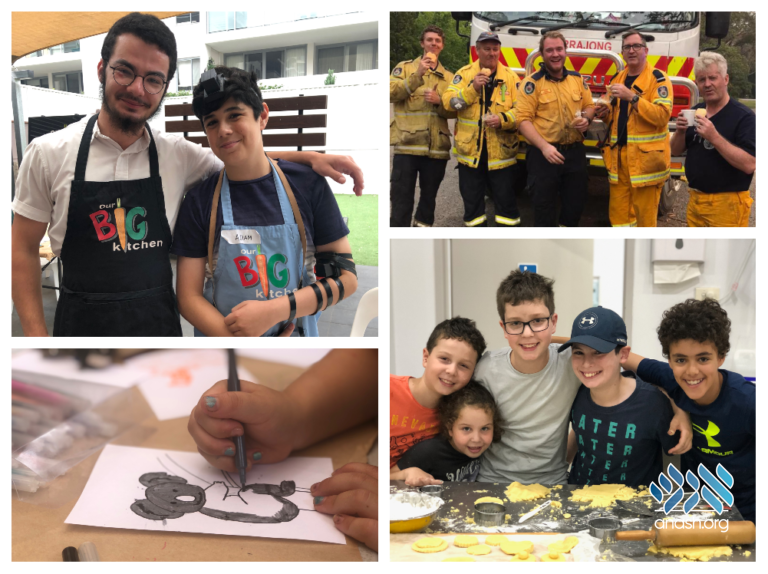 A self-described ‘non-observant’ woman penned a letter to Rabbi Dovid Slavin, founder of Our Big Kitchen in Sydney, describing how volunteering in his center gave her a reason to be proud of her Jewishness.

As fires ravage Australia, Our Big Kitchen, a project of Chabad’s Yeshiva Centre, is continuing to do what they do best; help those in need. The following heartful letter was penned by a volunteer to founder Rabbi Dovid Slavin.

The facts in this article are absolutely true – names have been changed to protect privacy.

Australia is on fire.  It is almost unbearable to watch the nightly news knowing there is no end in sight, seeing whole communities go up in flames and firefighters overcome by exhaustion but not giving up.

Like thousands of others, we donated money and essential items to the families who had lost everything. But, I also wanted to do something that might, even for a moment, put a smile on a firefighter’s face, or give them a ‘hug’.

How do you do that when you’re far from the bushfires? Our Big Kitchen, or OBK, a communal kitchen in Bondi was my go-to place. OBK is a non-denominal sanctuary for humanity created by Rabbi Doctor Dovid Slavin and his wife Laya Slavin in 2005, and epitomizes everything that makes me proud to be Jewish. Let me tell you why.

I am not observant, I attend shul maybe once a year and my belief in organized religion is fading. My husband is not Jewish and my son’s Jack* and Ben* went to Christian-faith schools. I stay out of the Jewish ‘bubble’ in Sydney, and consider myself an Australian with Jewish heritage. I knew I should be proud of my Jewishness but I couldn’t pinpoint why, when most religions and secular societies advocate similar principles of kindness, righteousness and humanity.

My first visit to OBK was a Mother & Son bonding event organized by Ben’s Presbyterian school. The positive energy of the Slavins permeated the room and instantly made us feel part of a unique community doing something good. Many of the mums had not met a Jewish person before, and most had no idea that OBK was run by a Rabbi. Without exception, they left OBK that day feeling good about themselves and with the most positive and warm feelings toward Jews. Any stereotypical opinions the other mums may have had about Jews were completely quashed by their experience at OBK.

I knew I found my reason to be a proud Jew. I had found a place that nourished people on so many different levels, from the volunteers who came together to cook the food, to the people who received the food, to the many staff who found a nurturing place to rebuild their lives after trauma or incarceration, to a place that brought to life Tikkun Olam in so many ways.

A few years later, Ben was having some problems and he took ‘time out’ from school. It was not healthy for him to be at home playing video games every day.  I needed him to be in a safe, caring place. I called Rabbi Slavin, explained the situation and asked if Ben could volunteer at OBK for a few weeks. The next day, despite Ben’s protests, we were at OBK.  Ben begrudgingly said he would stay one day only and demanded I pick him up early. I walked into OBK at the end of the day and as tears welled in my eyes I looked at him cracking eggs into a bowl and chatting to other people.  I quietly watched until he saw me and said, “Mum, can you wait, I haven’t finished yet?” Then he turned to the others and said, “See you tomorrow.”

As we were walking out I spotted a man from my home town, Adelaide*. He told me that he was incarcerated for fraud and rather than sit in a jail cell for four years, he was working at OBK on day release from Sydney’s maximum-security prison, under the guidance of Rabbi Slavin.  He was so excited to see a familiar face and we chatted every day while Ben was at OBK. I learned that a number of the staff were former inmates who were rebuilding their lives thanks to opportunities given to them by OBK. Jobless people were being trained to become baristas, students were coming from across Sydney on volunteer programs and corporates were running team building activities, all to improve the lives of others.

Back to the fires. Last week I spent an extraordinary day at OBK baking biscuits for the firefighters.  The kitchen was jam-packed with volunteers creating thousands of biscuits, while outside, more people were writing messages of thanks, love and compassion to accompany the biscuits. This may sound cheesy, but the place was electric with the excitement of volunteers from a melting pot religions, nationalities and suburbs far and wide across Sydney. Strangers who were connected and empowered to work together to improve the lives of others.

All this from a kosher kitchen run by a Rabbi. It was magical. For me, it’s what being Jewish is all about.