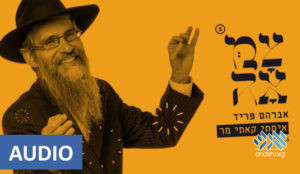 Ahead of Yud Tes Kislev, a single was released from the forthcoming album ‘Tzama 5’ performed by Avraham Fried.

This new release is part of the ‘Tzama’ project, which in previous years released 4 albums of Chabad niggunim in modern reinterpretations. The 5th album, including this single, will be released in the next few weeks, in time for Yud Tes Kislev.