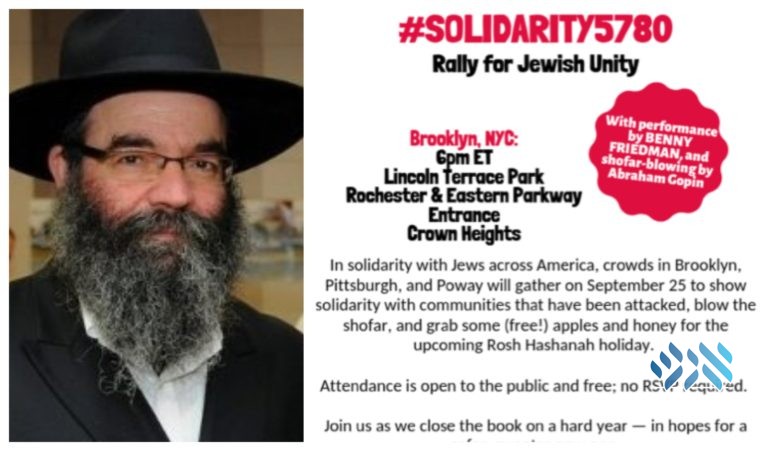 Tablet Magazine, a non-denominational Jewish publication, is coordinating several events across the country to show solidarity with Jewish communities which faced anti-Semitic attacks in the past year.

Jews from across New York will gather in Crown Heights on Wednesday evening for a rally in Lincoln Terrace Park. Benny Friedman will headline with a performance of Tishrei songs, and his father-in-law Rabbi Abraham Gopin will blow the shofar.

Simultaneous events in Pittsburgh and Poway will show support for the Jewish communities there, which have been the target of anti-Semitism and bloody violence this past year.

According to Tablet Magazine, the purpose is “to show solidarity with communities that have been attacked, blow the shofar as it is the month of Elul, and grab some (free!) apples and honey for the upcoming Rosh Hashanah.”

The Pittsburgh synagogue shooting was the deadliest attack on the Jewish community in the United States. 11 people were killed and 6 injured in the shooting on Shabbos morning – October 27, 2018.

The San Diego suburb of Poway was the site of the second synagogue shooting which occurred on the final day of Pesach – April 27, 2019. A gunman fired shots inside the Chabad of Poway, killing Lori Kaye HY”D and injuring three other people, including shliach Rabbi Yisrael Goldstein.

One of the most recent anti-Semitic attacks happened last month in Brooklyn when Rabbi Gopin, a resident of Crown Heights, was walking in Lincoln Terrace Park. A man attacked his face with a large brick, sending him to the hospital with a broken nose and head injuries.

The attack gained widespread media coverage and support when his son-in-law Benny Friedman, a celebrated singer, posted about the attack on social media. “We need safer communities,” Friedman wrote, prompting Mayor Bill De Blasio to respond with a vow to find the assailant.

Similar attacks have gone on in Brooklyn unabated over the last few years. Just last week, a Chassidic man was ambushed in Williamsburg by four assailants.

Wednesday’s solidarity event in Crown Heights aims to raise awareness about these vicious attacks, and to let the communities they are taking place in know that they are not alone. They are supported by their Jewish neighbors from throughout the city, as tomorrow’s rally will show.

Attendance is open to the public and free. “Join us as we close the book on a hard year—in hopes for a safer, sweeter new one,” organizers said.