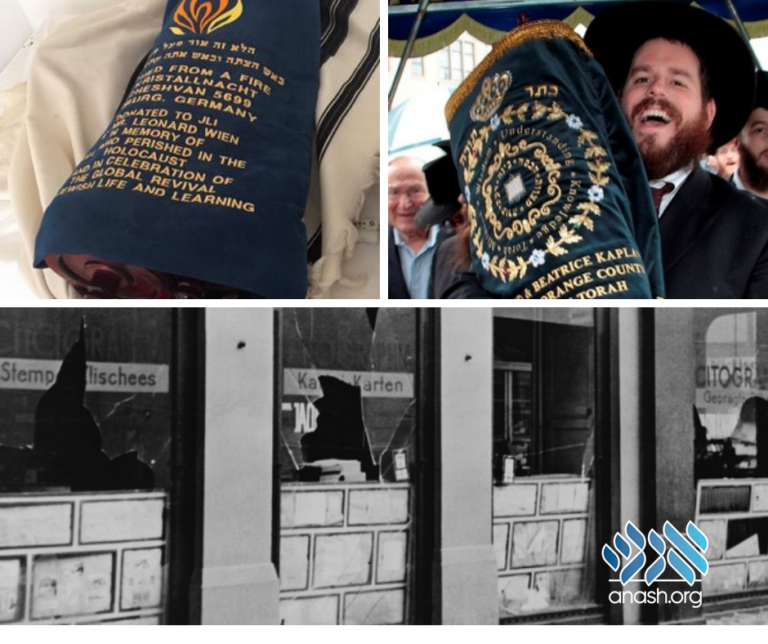 Chabad of Orange County, NY, led by Rabbi Pesach Burston, used a very special and historic Torah this past Shavuos. A Sefer Torah rescued during Kristallnacht.

In November 5699/1938, a Torah scroll was sentenced to death along with the Jewish people. On Kristallnacht, the “night of broken glass,” when more than 1,400 shuls were torched and 7,000 Jewish businesses were destroyed across Germany, 14-year-old Isaac Schwartz of Hamburg knew he had to act.

Seeing a pyre of Sifrei Torah and other Jewish sacred items left unattended, Schwartz doused the flames and attempted to recover the holy objects. His efforts yielded a single Sefer Torah.

As the situation continued to deteriorate rapidly, Schwartz had the scroll buried in the ground along with a number of other sacred items.

There it lay for the duration of the Holocaust until it was retrieved by Schwartz and his family. But the trauma had taken its toll, and much of the scroll had been rendered unusable.

Recently, the relic was purchased from the Schwartz family by philanthropist Leonard Wien and donated to the Jewish Learning Institute, which operates hundreds of adult educational franchises at Chabad Centers across the globe.

Over 18 months, a sofer painstakingly rewrote the faded letters and replaced parts of parchment that were beyond repair. Having been finally completed in 2016, the newly refurbished Torah has been sent on a historic mission, hopping from community to community, in a spiritual gesture of unity that spans continents, cultures, and generations.

The scroll travels in a blue cloth covering inscribed with a dedication from Wien to those who died in the Holocaust and in celebration of the revival of Jewish life and Torah study across the globe.

The historic scroll was present at Chabad of Orange County during the Shavuos, where it was used during the Shabbos and Shavuos leining. Participants were honored to carry, kiss and even read from its ancient letters.

“It is such a special way to celebrate the Giving of the Torah by hearing the Ten Commandments read from the Kristallnacht Torah,” said Burston. “It’s a powerful symbol of survival, resilience and continuity, and celebrates our past, present and future.

“Torah is non-judgmental,” the rabbi added. “Shavuos celebrates the Torah that was given to and is the heritage of every Jewish person, regardless of level of observance, or ‘label.'”

Hitler was also non-judgmental. Jews were persecuted for simply for being Jewish, regardless of “label” or their level of observance.

“The Lubavitcher Rebbe, the spiritual leader of Chabad, Rabbi Menachem M. Schneerson, has taught us that we must do the same – only in the positive,” Burston said. “At Chabad, we’re non-judgmental Judaism, reaching out to every single Jew, regardless of background, affiliation, observance, age or economic possibilities.”