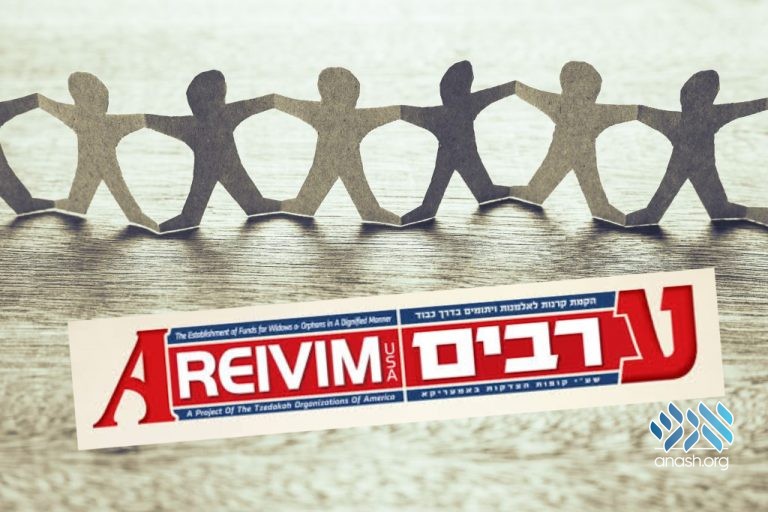 Rabbi Yosef Menachem Fishman director of Areivim USA said that despite the challenge, the mosad’s Rabbinical and governing boards were in unanimous accord that all payments would indeed be met.

The COVID-19 outbreak has handed to so many individuals and organizations heartbreaking situations and challenges that they never could have imagined. Such was the topic of discussion at a recent meeting of the leaders of Areivim USA, an organization well known for its unique system of providing financial aid to families after the tragic loss of a parent. Areivim had to consider how it would handle a record number of claims being filed at the same time.

Rabbi Yosef Menachem Fishman, Areivim’s director, said that despite the challenge, the mosad’s Rabbinical and governing boards were in unanimous accord that whatever the strategy, all payments would indeed be met.

“Everybody agreed that we will be paying each family the full amount; the only question is the details of exactly how to do that, which we are working on right now,” he told Hamodia.

Conceived of 12 years ago, Areivim has built up a membership base of over 20,000. In the event that tragedy strikes any one of them, R”l, each member is billed seven dollars to cover payments of $100,000 for each yasom, as well as for the almanah left behind (in households with three or more children). Since its founding, the organization has distributed more than $22 million to families.

In recent weeks, as COVID-19 has plagued the nation and especially the New York metropolitan area, 15 Areivim members passed away, leaving 75 yesomim to be cared for. To fully cover the amount, $7.5 million has to be raised.

Last Thursday, Areivim convened two meetings, one of its governing board and another of its Rabbinical board, to discuss whether the organization should invoke a clause in its member contract that allows it to consider altering its payments to families in the event of a catastrophe that leads to a large loss of life at one time, such as an earthquake or war, R”l.

The first of these conferences was held in a large hall to allow for social distancing, with all participants wearing gloves and masks. In addition to the organization’s board, the meeting was attended by representatives of kehillos from many major Jewish communities in the metropolitan area.

“There was absolutely no disagreement that we will be standing by our policy and paying the full amount to each family, b’ezras Hashem,” said Rabbi Fishman. “They should all feel secure. We only hope that Areivim will never have to think about such a question ever again.”