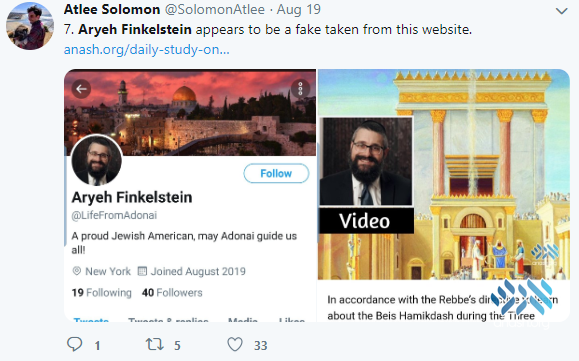 As part of a nefarious scheme to paint Jews in a negative light, anti-Semitic users are creating fake ‘Jewish accounts’ to spread hateful tropes.

Several days ago, a 4chan user posted a message urging followers to “create a massive movement of fake Jewish profiles” on social media. The anonymous poster wrote, “As a Jew, normies will listen to you…. You can take the blame for world events. Post redpill facts about your fellow Jews.”

“After the call went out,” wrote Yair Rosenberg, a writer who followed the story on Twitter, “a network of new Twitter accounts run by white supremacists pretending to be Jews popped up. They all follow each other and promote anti-Semitic and anti-Israel content.”

These accounts are being created with Jewish sounding names, the profiles featuring stolen pictures of Orthodox and Israeli Jews. They are then used to spread all kinds of false information and hateful rhetoric. For example, an account under the name Dr. Morris Goldenstein posted, “At the height of American slavery, 78% of slave owners were ethnic Jews.”

A jarring example of such a profile, created under the alias Aryeh Finkelstein, features as its profile picture a photo of shliach Rabbi Mendel Kaplan of Thornhill, Ontario. Under the picture, “Aryeh” had written messages that are clearly antithetical to any shliach’s values and way of life.

“I have no idea why they chose my picture,” Rabbi Kaplan told Anash.org. “They either took it from your website, or from Chabad.org… someone reported it, the account is down.”

While some accounts promote anti-Israel and anti-Jewish organizations, others are simply being used to spread hateful and damaging stereotypes. “I can’t tell you how sad it is to hear my fellow Jews talking down to people of color,” was posted to one fake account. “We Jews have been known to bend the truth at times for our own advantage,” was written on another.

Twitter is currently investigating the false accounts; at this time, several have been permanently suspended.