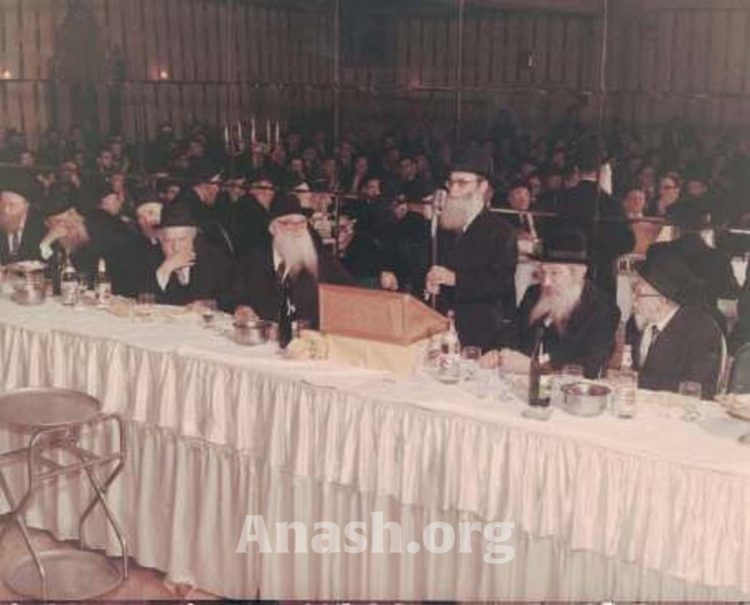 In an effort to halt the sale of the Anshei Lubawitz shul of Boro Park to a real estate developer, several members submitted the paperwork seeking “landmark status” for their building. Dovid Shor, a regular at Anshei Lubawitz and an activist in the ongoing battle to save the shul, together with historian Anthony W. Robins and activist Yaakov Behrman, compiled the 30-page request describing the history of the shul and the Anshei Lubawitz congregation.

The current building was built in 1906-07 for Temple Beth El, a congregation of Eastern-European origin organized in 1902, just as Brooklyn was emerging as a major Jewish population center, and Boro Park as a new Jewish neighborhood. In 1922, the building was bought by Anshei Lubawitz, to serve the Lubavitcher chassidim and affiliates in Boro Park of the time.

Besides this request, many others have submitted letters requesting that the shul be named a landmark, including Rabbi Yehuda Krinsky, Chairman of Merkos Linyonei Chinuch, Rabbi Berel Levin, Head Librarian of Agudas Chasidei Chabad, Rabbi Yitzchak Raitport, Rov and Rosh Kolel in Boro Park and author of many seforim, as well as Rabbi Sholom B. Hecht of NCFJE.

We bring you here the Lubavitch history of the shul as recorded in the request.

Chevra Anshei Lubawitz
Chevra Anshei Lubawitz had direct connections with the Sixth and Seventh Lubavitcher Rebbes, and by extension, possibly, with the Fifth Rebbe. The history of Anshei Lubawitz (alternate transliteration of Lubavitch; the Hebrew phrase translates as “the people of Lubavitch” or “the Lubavitch community”) goes back to its founding in 1914 (the congregation, not the building). Though located thousands of miles away from the center of the movement, the congregation not only adopted the name “Lubawitz,” but actually specified in its constitution that that name could never be changed (article 1 point 1).

The Constitution lays out the working arrangement of the institution – election and duties of officers, dues – and details of how synagogue services shall be conducted. But it also requires very specific ethical behavior that members (“brothers” and “sisters”) are obliged to follow, e.g., “When a brother in good standing reports himself as sick, then a sick committee must immediately visit him; on the Sabbath and on Sunday, the President and Vice President must go visit him” (article 6, “Benefits of the Sick,” point 1). Or: “When a brother, or the wife of a brother, has died, God forbid, the society must provide all of the deceased’s needs.

Regardless of whether rich or poor, everything has to be provided by the society: preparation of a plot, undertakers, death wagon, carriage” (article 7, “Benefits in the case of a Death,” point 42). Such specific requirements – though in general required by Jewish religious tradition – are believed to derive from a letter written by the Sixth Lubavitcher Rebbe that asked Lubavitchers to follow the ways of his father, the Fifth Rebbe.

Though the first rabbi of the congregation, Rabbi Waltman, wasn’t himself a follower of the Lubavitcher movement, his successors were.
In 1928, Rabbi Waltman was succeeded by Rabbi Eliyahu Simpson, a disciple of the Sixth Rebbe (Yoseph Yitzchak Schneerson) who printed a book of Hasidic texts based on his teachings, in honor of the anniversary of the Sixth Rebbe’s liberation from a Soviet prison. Rabbi Simpson’s booklet, Discourses from the Rebbe to Study Publicly on Yud-Beis-Yud-Gimmel Tammuz, During the Days of Redemption, was printed in 1929-30 for the members of the Anshei Lubawitz synagogue and for followers of the Lubavitch movement across the United States.

The Sixth Rebbe wrote a letter to the congregation in praise of its decision to hire Rabbi Simpson. Dated 27 Nissan 5688 (April 17, 1928), mailed from Riga in Latvia, the letter reads: “To my dear friends, people of our union, members of Congregation Anshei Lubawitz, Boro Park, Brooklyn. Peace and blessing. On the occasion of their appointing my dear disciple, the honored and distinguished, possessed of so many good qualities, Rabbi Elya [Simpson]. I would like to wish the entire Congregation Anshei Lubawitz…everything good in body and in spirit…. Your friend who is concerned for their well-being, Yosef Yitzchak [Schneerson].”

The same day, the Rebbe wrote directly to Rabbi Eliyahu: “…With this I would like to wish you Mazel Tov [congratulations] upon being appointed to the Rabbinic position at Congregation Anshei Lubawitz of Boro Park…. May God strengthen you that you may produce many students who are imbued with the values of Torah and fear of Heaven…. Yoseph Yitzchak.”

Another rabbi of the congregation with a direct connection to the Sixth and also the Seventh Rebbe was Rabbi Yitskhok Duber Ushpal, appointed rabbi in 1957. Rabbi Ushpal was a noted author, head of the Lubavitch Burial Society, and a leading legal authority on the laws of death and mourning. Dozens of his students moved to Boro Park to join his congregation.

By this time, the movement had relocated from Europe to Eastern Parkway, and was led by the Seventh Rebbe (Menachem Mendel Schneerson); in a letter of April 30, 1957, addressed to Congregation Anshei Lubawitz of Boro Park, the Rebbe wrote:

“With sweetness and joy I received the good news that, in a good hour, you have chosen and appointed as your Rabbi, the brilliant and kind Rabbi Yitzchok Dov Ushpal, who is blessed with many good qualities …”
“Having known Rabbi Ushpal for so many years, knowing his impressive background, and the schools in which he has studied, and given the many years of personal instruction and guidance that he has received from my illustrious father-in-law [the Sixth Rebbe], may his memory be a blessing, I am strongly confident that, with the support…of the members of your congregation, he will indeed by successful in strengthening and broadening this house of worship so that it serves as a model to others, especially since you carry the name of ‘Lubavitch.’”

Congregation Anshei Lubawitz continues to be associated with Chabad Lubavitch.