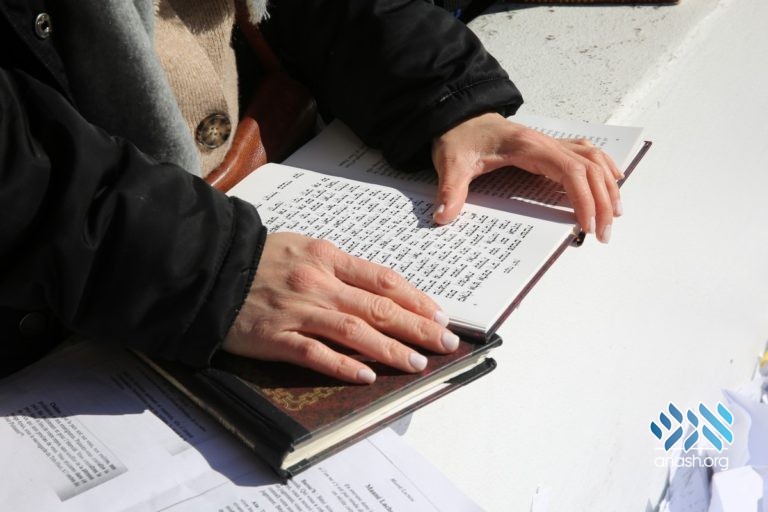 In an letter penned to Crown Heights women and girls, a mother writes about her experience on the women’s Ohel bus:

I hadn’t been to the Ohel in months. Being bogged down with life’s challenges, it was extremely hard for me to find the time, and yes, sometimes the money, to get to the Rebbe’s Ohel.

Every time I set aside a time to go, either the babysitter canceled or an urgent matter came up.

I sat down last week and realized that it’s been quite some time since I’ve been to the Ohel.

In the process of trying to find a ride, I received a WhatsApp message.  Later that day, I saw an article online too about a new bus to the Ohel for women; Tuesday evenings at 6 PM, which departs from corner President and Kingston. The cost was only $3 round trip. Under no circumstances was I going to miss this opportunity!

Greeted by a packed bus of women, I made it just in time before the bus pulled out! The ride was smooth, and the atmosphere was uplifting. There were nigunnim playing softly in the background. Learning texts, and Chassidishe stories were handed out.

On the return bus to Crown Heights, I chatted with the women around me. I was now charged with renewed energy and strength. I am filled with gratitude for this new initiative and tremendous service to the community.

Thank you to Yossi and Nechama Dina Katz for generously funding this project, and Vaad Or Vechom Hahiskashrus for pulling it all together.

I would just like to advise those who would like to take advantage of this service, to come a few minutes early. I came around 6 PM, and the bus was already full.

Thank you again, and Besuros Tovos to all!

The bus leaves every Tuesday evening, at 6 PM sharp. Departure is at the corner of Kingston Ave. and President Street. $3 round trip.

The organizers of the bus shared this amazing story with Anash.org to illustrate the power of davening by the Ohel.

Yoel Brill, former director of the Rofeh Cholim Cancer Society (RCCS) and founder of A Hope to Heal, related the following story he experienced last night while visiting the Rebbe’s Ohel in anticipation of tonight’s RCCS barbecue in Flatbush:

Five years ago, as I was planning the RCCS Flatbush annual summer barbecue, I figured – “why not expand the communities which are involved?” So I asked my good friends in Crown Heights to join in and make it a joint Flatbush and Crown Heights barbecue.

The night before the event, I traveled to the Ohel and davened that RCCS should have hatzlacha with the barbecue. It was with Hashgacha pratis that I met a wealthy man at the Ohel, who was curious as to what I was doing at the Ohel in middle of the night, and after explaining to him my situation he gave me a generous check towards the event.

I cannot describe how amazed I was that night that my tefillos where answered so quickly, and thus the tradition began. Every year, the night before the barbecue, I go to the Ohel, every year without fail I witness the Koach of the Rebbe and the power of tefilah.

Last night, I wasn’t sure what to do. You see, around six months ago I founded a new organization, A Hope to Heal. With elaboration, suffice it to say that A Hope to Heals’ mission is to help non-cancer patients. My new responsibilities became very overwhelming and after getting guidance from gedolei yisroel and of course after davening many times at the Ohel – I left RCCS to fully focus on A Hope to Heal.

In my mind I wasn’t sure if I should continue my tradition of going to the Ohel the night before the RCCS barbecue. But, being that for the first time in my life I accepted to be an honoree at the RCCS barbecue, I decided that I should go to the Ohel and once again daven for the success of the event. I thought to myself that I’m having an inaugural ladies’ luncheon upstate next Wednesday, which includes women from Crown Heights, and I wouldn’t be able to go before that event so now is a perfect time to daven for both.

After washing my hands and filling my cup of tea (that too is a tradition), I noticed a man that had been standing outside for a while. I thought “why is he here in the middle of the night? Is there a barbecue somewhere else and he also goes the night before? Is he ok? Is his family ok?”

Well, after looking at him and seeing the burden he was carrying on his face, it was clear to me that this man was there to daven for something that must have been very personal and very serious. Without hesitation, I approached him and asked about his well being. He replied “all is well” with his mouth, but his eyes told me otherwise. I did not want to intrude on his privacy, so I discreetly took out my organization card and left it near his car.

Driving home, I couldn’t stop thinking about this man and his troubles, and most importantly – how I could help him.

My curiosity lasted only until this morning, when I was awakened by a call from the man. “I’m not sure if this is the right number, but are you “A Hope to Heal”? Ribono Shel Olam, I once again see miracles! I am certain that it was the Koach of tefilla and of this holy place that put the two of us together in order that we should both have our prayers answered.