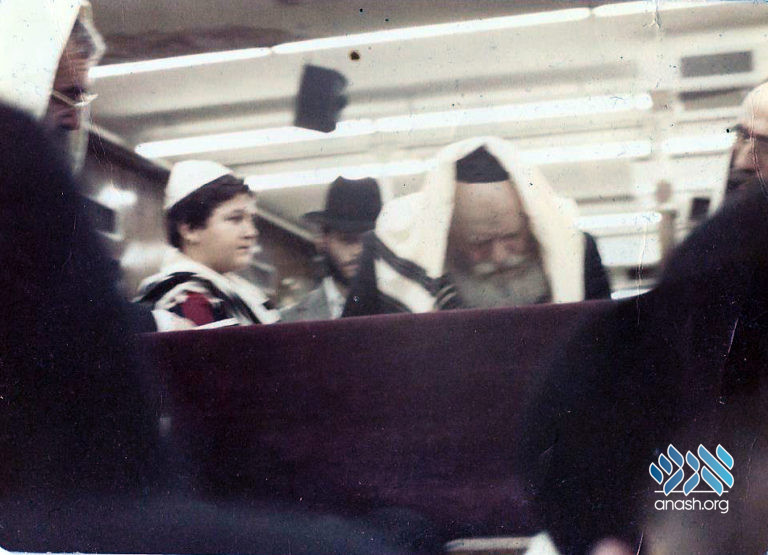 When Rabbi Avrohom Winner helped a couple put up mezuzos, he was amazed to see the husband’s cherished photo of the aliya he had merited to have by the Rebbe on the occasion of his bar mitzvah.

Editor’s note: Until 8:00 PM tonight, your support for Released Time’s wonderful work will go four times as far. From now until the end of Yud Shvat, every donation made at JewishHour.org/donate will be quadrupled.

The following story was related by Rabbi Avrohom Winner, shliach to Manhattan Beach.

One day I received a phone call.

“Rabbi! the Mezuzos worked last time, and we want to do it again,” said the man on the other end of the line.

It was Mike, a man whom I had met some time ago. He and his wife Stella had asked me once before to put up Mezuzos but they had since moved. Sure enough, that evening I found myself at Mike and Stella’s new home. I asked Mike to tell me what he had meant by his comment during our phone conversation earlier that day.

Mike went on to explain that after their first son was born, they were having difficulty having another child. We put up the Mezuzos, and soon after his wife was expecting their second child. They were once again trying to have another child, so they decided to call me again with the same request, figuring that if it worked once it could work again. (I later found out that Baruch Hashem, they did in fact have another daughter after we put up the mezuzos a second time.)

As I was getting ready to leave, Mike brought me an old discolored photo of the Rebbe during Krias Hatorah in 770. In the picture, there was a young Bar Mitzvah boy standing nearby after his Aliya, with a Lubavitcher bochur standing behind him.

Turning to me, Mike asked, “Do you recognize him?” He was pointing to the young Bar Mitzvah boy in the picture. I took a closer look. It looked just like Mike’s son, but I knew that was not possible. So, I figured it must be Mike himself. With that presumption, I turned to him and asked in surprise, “How did you end up in 770, and more to the point, how did you get an Aliya by the Rebbe!?”

Smiling proudly, he began to relate the story of his youth. He reminisced about what it was like growing up in New York as a Russian refugee. He spoke about PS 251, the elementary school that he attended with many non-Jewish children and a small percentage of Jewish ones. The best part of his week, he told me, was when two yeshiva students named Ariel and Moshe, would take them out of school together with five other kids to spend an hour at the closest synagogue.

He began elaborating on this Jewish program called Released Time, where the children sang Jewish songs and heard countless Jewish stories. Mike spent many Shabbosim in Crown Heights. He remembered seeing the Rebbe a number of times as he stood under the big Tzedaka box in a narrow hallway. The Rebbe would pass by and look at the children while the crowd of people would sing and clap wildly.

When it was time for his Bar Mitzvah, Ariel arranged for him to have his aliya in 770 during the Rebbe’s Minyan. “I know,” Mike said to me, “it was a very special thing that I was able to have my Bar Mitzvah with the Rebbe.”

This past summer, at a beautiful hall with friends and family, Mike and Stella’s son had his own Bar Mitzvah. During his speech, Mike showed the audience the precious picture of his Bar Mitzvah by the Rebbe. He told everyone that he knew he was so lucky to have had a proper Bar Mitzvah, and he therefore decided that when his son would be a Bar Mitzvah, it would be the same way.

Then, full of emotion he called to me in the crowd. “I may not be all that religious, but all of this (he pointed to his family), the fact that I married a Jewish girl and wanted a Jewish family, was all because of two yeshiva students who came week after week to teach six forgotten Russian – Jewish children about their heritage.”

Mike and Stella are close friends and continuous participants of the many programs at Chabad of Manhattan Beach. Their three beautiful children are graduates of our Hebrew School.

Every dollar donated at JewishHour.org/donate before 8:00 PM on Wednesday will be quadrupled. Support Released Time’s wonderful work!