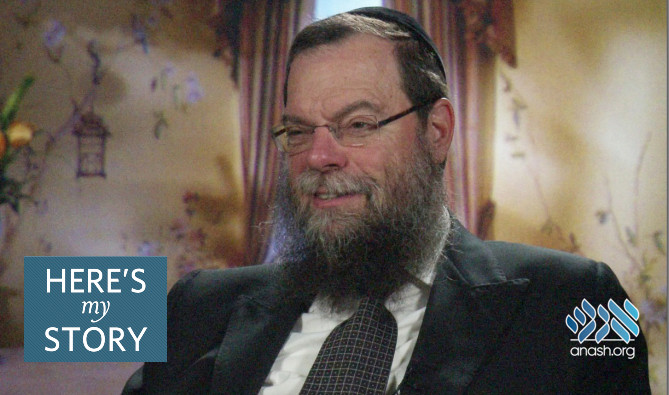 Rabbi Yossy Goldman has served as a Chabad emissary in Johannesburg, South Africa, since 1976. He is the senior rabbi at the city’s Sydenham Shul and president of the South African Rabbinical Association.

When I was growing up in Crown Heights, for a while we lived on Brooklyn Avenue which was on the Rebbe’s route from his home on President Street to Chabad Headquarters on Eastern Parkway.

As he was walking by one time just before Rosh Hashanah of 1956, it so happened that my mother was outside with us kids, and my little sister Kraindy, who was playing on the ledge outside of the house, fell down the stairs. My mother, who was in her last months of pregnancy, ran to pick her up.

That evening after prayers, the Rebbe motioned to my father that he should come into his office with him. At first my father thought it must be a mistake because he had not requested to speak with the Rebbe on such a holy day, but then it became clear why the Rebbe wanted to speak with him. The Rebbe explained that he had seen what happened earlier in the day and that my father should reassure his wife — the little girl was not injured in the fall and would be fine, the Rebbe said, because when a child falls an angel puts out his hands as a cushion. However, his wife should focus on taking care of herself during her pregnancy and try not to run so fast.

Thus, I learned at an early age that the Rebbe was always looking after us.

At that time, I was enrolled in the Chabad school at Bedford and Dean, which I attended from first grade through high school, after which the Rebbe directed that I should go to the yeshivah in Montreal. That is where I learned until I received my rabbinic ordination and got married.

While still in Montreal, I had the experience of hosting a short Jewish radio broadcast. What happened was that Chabad bought ten minutes of time on a religious program called “The Jewish Hour” (which, despite its name, actually ran for two hours) and I was asked to introduce a recorded Tanya lesson, say a few inspirational words, and announce Chabad events in town. Half of this was in Yiddish and half in English.

At first, it was a little intimidating to talk into a microphone knowing many people were listening, but it proved a good experience for later in my life, when I was sent as the Rebbe’s emissary to South Africa, where I still serve as a rabbi.

Upon my arrival there in 1976, one of the first things I asked was, “Is there a Jewish radio program in South Africa?” And when I heard there was not, I said, “Well, let’s start one.” And we did. I ended up hosting “The Jewish Sound” program every Sunday for twenty- four years. The idea of using the radio as a means of disseminating Yiddishkeit appealed to the Rebbe and often when I came to New York, I would be asked by his secretary, “How’s the program going?” The Rebbe valued the ability of the radio waves to reach far-flung places in South Africa that were otherwise unreachable.

During the last years of South Africa’s apartheid regime, there was a very tangible fear that there would be a violent and bloody revolution, and I was able to use the radio program to disseminate the Rebbe’s message that people shouldn’t panic and leave the country. All would be well, the Rebbe promised, and so it was.

The Rebbe assured and reassured the Jews of South Africa time and time again. Everybody knew that the Rebbe had made an absolute, definitive statement about the future of South Africa — there would be a peaceful transition of power and the Jews had no reason to panic and run away.

Incidentally, this is the same advice that the Rebbe gave Israelis during the Gulf War in 1990.

During that war, Iraqi dictator Saddam Hussein was firing Scud missiles at Israel, and everyone was panicking. But the Rebbe came out with a strong statement: “Israel is the safest place on earth.” (In fact, despite thirty-nine Scud missiles landing in Israel, hardly anyone was killed by them.)

It was clear that the Rebbe held the strong opinion that — despite the apparent threat — there was really nothing to fear; there was no need to leave Israel and no need to cancel travel plans to Israel — indeed, all were encouraged to go there to fortify their fellow Jews. In view of the Rebbe’s stance, I suggested to the head emissary in South Africa, Rabbi Mendel Lipskar, that we join a solidarity mission then being organized by the South African Zionist Federation. Rabbi Lipskar asked the Rebbe, who advised we should go, and so we went.

In fact, I trusted the Rebbe so completely that I took along my twelve-year-old daughter Zeesy. I have a picture of us arriving in Israel and Zeesy being fitted with a gas mask at the airport. We were there for five days; we saw the Patriot defense system standing at the ready, but during that time no missiles fell.

So I have been privy to many messages of reassurance from the Rebbe — he reassured my mother about the health of my little sister when she fell, he reassured South Africa, he reassured Israel, and he also reassured my wife Rochel when she was about to give birth to our tenth child in 1991.

During the labor, the attending physician, Dr. Haim Neifeld, a senior, highly-experienced obstetrician was recommending a Caesarean section because the baby was in a transverse position — that is horizontal instead of vertical. He tried to reposition the baby but was not successful, yet my wife — a strong woman who had given birth to all our children naturally — would not agree to a C-section. The doctor called in another senior physician, Dr. Ronnie Klein, for a second opinion, but Dr. Klein only agreed with Dr. Neifeld.

When my wife, who is a great believer in Divine Providence, still would not agree, Dr. Klein suggested that I call New York and consult the Rebbe. I found it a bit ironic that a non-religious doctor should be telling me, the Rebbe’s emissary, to call New York, but it had not occurred to me because there were no cell phones in those days, and we were in the labor room at one o’clock in the morning. In fact, placing the call proved quite complicated, but I managed to do it.

The answer from the Rebbe came back: “Since the doctor himself suggested to ask here, I trust he won’t bear a grudge against me if I recommend that he listen to the mother in labor and wait.”

Lo and behold, the baby, a boy, turned by himself into a head-first position, which the doctor said almost never happens at such an advanced stage of labor. And thank G-d it was a natural delivery. (Indeed, I later learned that the doctor was so impressed by what happened that he became Torah observant as a result!)

We named him Nissen, which means “miracle,” after my uncle, but also because he had arrived in this world in such a miraculous way.

Rabbi Yossy Goldman has served as a Chabad emissary in Johannesburg, South Africa, since 1976. He is the senior rabbi at the city’s Sydenham Shul and president of the South African Rabbinical Association. He was interviewed in October of 2014.