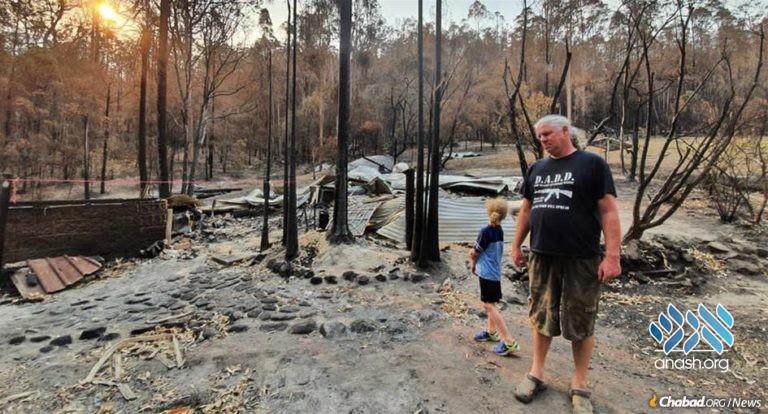 The Friday before she lost her home, Verne Dove went with her family to a Shabbat dinner in Coffs Harbour, a small coastal city in New South Wales, Australia.

“It was like an apocalypse; 5 o’clock in the afternoon, and everything was orange. It was the most eerie thing I’ve ever experienced,” Dove tells Chabad.org. “At the Shabbat dinner we had black, burned leaves falling everywhere around us; we weren’t even sure where the fire was, it was all just orange. It was like being under a cloud of fire without being able to see the fire. We were stuck there, trusting we’d be OK and make it through the dinner.”

As Australia enters the new decade, devastating bushfires ravage the continent; the fires blaze in every state and territory. More than 21 million acres—roughly the size of Maine—have been burned, with 25 lives lost and several missing, and almost 2,000 homes destroyed. An estimated half-billion animals have been killed, pushing some of Australia’s unique and already endangered species further towards the brink of extinction.

Under scorching temperatures—reaching 104-plus degrees in all six Australian states last month—and extreme drought conditions, the fires have spread rapidly, with firefighters battling flames more than 130 feet high in some areas. Authorities are calling it the country’s worst bushfires in history, with the sheer size of the flames far surpassing that of the 2018 California wildfires and 2019 Amazon fires.

Dove, who with her family lives in tiny Nana Glen (population 1,055) in New South Wales’s tropical north, received notice to evacuate her home immediately as the fires began to close in. She gathered her three children, the youngest just 9 months old, and drove to the evacuation center back in Coffs Harbour, the closest sizeable city. Her husband, Troy, stayed behind to defend the family butterfly-house business from the fires before eventually joining his family in safety.

“It was just smoke as far as you could see,” says Dove. Hours after they left, the family home was reduced to a smoldering heap of metal and ash, charred beams and burned-out car bodies littering the property. “There were rivers of molten metal all around where the house was, all the window panes had melted together. We had no idea the fires would be that hot.”

All that was left of their 25-acre property was a children’s play set that remained unscathed. “It was like the fire had a personality,” says Dove. “We saw what survived and said, ‘There’s some hope in this devastation.’ ”

All that was left of their 25-acre property was a children’s play set, which remained unscathed.

Rabbi Yossi Rodal, co-director with his wife, Malki, of Chabad-Lubavitch of Rural and Regional Australia (RARA), which serves isolated Jews and Jewish communities scattered throughout the vast continent, says that like the Dove family, at least 250 Jewish families have been directly impacted by the devastating bushfires.

Camp Gan Israel of Melbourne, a Jewish childrens’ summer camp, was evacuated just as camp began with campers and staff members being packed onto buses and taken to safety.

In a historic action not seen since World War II, the Australian Defence Force and Royal Australian Navy have been deployed across the country, with reservists being mobilized in recent days. International firefighting aid has also come from the United States, Canada, New Zealand and Singapore.

Meanwhile, the Rodals have been coordinating relief efforts together with Jewish community volunteers.

“It’s heart-wrenching to see the pain people are in, and it’s our job to be there for them in whichever way possible,” says the rabbi. Working together with Chabad of Melbourne’s Aliya Institute, a youth group, they have been collecting, packing and then distributing necessary supplies such as bottled water, canned goods and other household staples for affected communities and shelters around the nation.

Chabad of RARA has already raised more than $13,000 to aid those who have lost their homes, businesses and essential belongings, as well as helped accommodate those who have been displaced.

The Dove family’s business had already taken a hit because of the fires’ impact on the area’s tourism. Now, with their home lost, Dove says that aside from her insurance policy, the only help they have seen is when Chabad of RARA stepped in. “We lost a house, and no one cares. We were forgotten, left with the clean-up, and there was no help.”

Rodal contacted Dove as he was reaching out to the hundreds of affected families, offering to assist them. “He called at just the right time,” says Dove, noting that the rabbi offered the exact sum she needed to remove the rubble. “You have no idea how much that will help,” she says emotionally. “It’s been absolutely phenomenal.”

The rabbi offered the exact sum the Dove family needed to remove the rubble that was once their home.

The Doves aren’t the only ones.

From Mallacoota, a sleepy coastal town hit by a mammoth blaze, cut off by road, and accessible only by sea—prompting a massive navy evacuation operation, Rachel wrote: “Thank you so much for your call, Yossi. I’m deeply touched by this connection from you and Chabad. I had a little good ‘feeling so cared for’ cry after we spoke. With much gratitude and appreciation, Rachel.”

In Jindabyne, a popular ski destination in the winter now threatened by deadly fires, Bob wrote: “Thank you for caring as I do have nothing.”

In a historic action not seen since World War II, the Australian Defence Force and Royal Australian Navy have been deployed across the country. (Photo: POIS Helen Frank/Commonwealth of Australia)

Skies across huge swathes of rural Australia have turned bright orange, but the major cities have not been spared either. As the flames continue to rage for months, Melbourne and Sydney are reporting hazy gray skies and hazardously low-air quality. Orange skies are being seen over Auckland, New Zealand, and air quality has been affected as far away as Chile.

In Canberra, the nation’s capital city centrally located between Melbourne and Sydney on the country’s east coast, Rabbi Shmueli Feldman, co-director of Chabad Australian Capital Territory (ACT), has been in a position to help hundreds passing through the capital, as large stretches of the highway interconnecting Australia’s two largest cities are closed, forcing many to detour through the city.

“As one of the only Jewish presences between Melbourne and Sydney, we have been providing free fresh kosher meals and accommodation to many,” says Feldman. He estimates that they have already helped around 100 individuals relocate from stricken areas, with some being put up in Chabad ACT’s crisis accommodation housing. With the assistance of Chabad of RARA, others are being hosted in Melbourne and Sydney.

“Canberra has had the worst air quality among the world’s major cities recently,” says Feldman. “There’s no real reprieve; the country is living in smoke and fear, many shops are out of bottled water, and air masks have gone off the shelves.”

This Chanukah, Feldman was forced to hold his annual celebration indoors due to the poor air quality, and Chabad’s preschool hasn’t had outdoor-play for weeks on end.

Among those Feldman recently assisted is Christina “Esther” Hacker, a 95-year-old Holocaust survivor and former Nazi fighter. She was evacuated from Jindabyne, a two-hour drive from Canberra, and together with her family placed in a Chabad apartment until she could return home.

Even as the Emergency Services Agency warns that Canberra and the ACT region may be impacted by the fast-moving bushfires or the dangerously polluting smoke they leave in their wake, Feldman says Chabad plans to sit tight.

“Under these circumstances, how can we leave? G‑d has given us such an important opportunity to help others in desperate need, we are honored to embrace it,” says Feldman.

Chabad North Shore, in Sydney’s northern suburbs, directed by Rabbi Nochum Schapiro, is accommodating families displaced by the fires, and Rabbi Dovid Gutnick, director of Chabad East Melbourne, has arranged with a Jewish-owned hotel with locations in Melbourne and Sydney to put up some of those who lost homes, free of charge.

Skies across huge swathes of rural Australia have turned bright orange, but the major cities have not been spared either. As the flames continue to rage for months, Melbourne and Sydney are reporting hazy gray skies and hazardously low-air quality. (Photo: CPOA Brett Kennedy/Commonwealth of Australia)

Chabad of RARA has also launched a campaign encouraging people from around the world to take on an extra mitzvah in light of the bushfires plaguing the nation.

“Our country is on fire, and not in the metaphorical positive sense of the phrase,” wrote Rodal in a social-media post announcing the campaign. “Quite literally, our beautiful country is ablaze with out-of-control raging bushfires.

“We must take action to help and assist at this crucial time. We can donate to funds assisting bushfire relief; we can stand up and join the hundreds of donation appeals around the country; and we can go one step further.

“Bushfires are by nature volatile and unpredictable. They don’t always follow a rational pattern, and at times, defy the laws of nature.

“And so our response needs to be the same: beyond the rational, natural order of things. We can give of ourselves in the supernatural realm: through increasing in our prayer, good deeds and Torah learning.”

Over 21 million acres—roughly the size of Maine—have been burned, with 25 lives lost and several missing, and almost 2,000 homes destroyed. An estimated half-billion animals have been killed, pushing some of Australia’s unique and already endangered species further toward the brink of extinction. (Photo: CPOA Brett Kennedy/Commonwealth of Australia)

Preparing to deliver home-cooked food to those who have lost their homes.