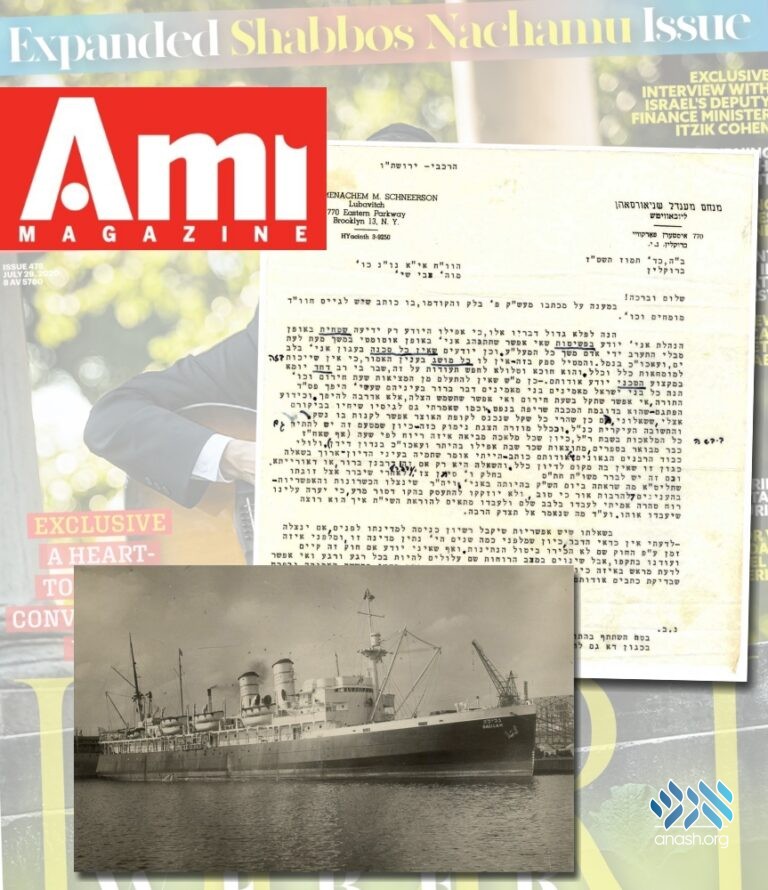 The recent issue of Ami Magazine spotlighted the Rebbe’s struggle for Shabbos observance on Israeli ships, and how he drew on his knowledge of marine mechanics for this holy purpose.

“If you really want to go to the Holy Land, you can travel by El Al or on a non-Jewish ship, or even not go at all. But the voyage you have planned is absolutely contradictory to the Torah.”

Who was the letter writer, and what was the issue at hand?

The year was 1953, and the ZIM shipping company had just launched a transatlantic passenger line. Founded in 1945, the Israeli firm had brought hundreds of thousands of Jews to the emerging state.

Now, eight years later, the company had recently purchased several dozen ships with the aid of German reparation funds and begun offering passenger cruises to Europe, the United States and the Caribbean.

While the voyages from Israel to Europe took under a week, those to the United States took longer than seven days—which meant that the ocean liners sailed on Shabbos.

The Lubavitcher Rebbe was extremely pained by the fact that Jewish-owned ships — with Jewish crews, carrying Jewish passengers — were traveling on Shabbos. He wrote to chasidim who were planning to sail aboard ZIM-owned vessels asking them not to do so, encouraging them to fly instead or book tickets with companies owned by non-Jews.

On April 11, 1956, terrorists entered a shul in Kfar Chabad and opened fire, killing three children and one adult and injuring five others. Several Chabad representatives traveled to Eretz Yisrael to comfort the community, and the Rebbe himself paid for their hefty El Al airfare rather than have them go by ship.

In response to the public awareness campaign, ZIM put out a statement explaining in great detail why there was no chillul Shabbos involved. For the duration of Shabbos, they asserted, the ships ran automatically. But the Lubavitcher Rebbe, who had studied engineering in his youth and volunteered at the Brooklyn Navy Yard during World War II, dissected each point and explained why the company’s claims were false.

“The claim that everything is done automatically during the 24 hours of Shabbos is absurd,” the Rebbe wrote, “and I state this with the fullest authority, being an engineer myself and having studied marine mechanics.”

In addition, the Lubavitcher Rebbe displayed great knowledge of the distillation system that provided clean water to the ship’s passengers, as well as the lighting and boiler systems, proving that there was no way for a ship to operate at sea for 24 hours without desecrating Shabbos.

The Rebbe wrote to dozens of leading poskim and rabbanim at the time, including Rav Tzvi Pesach Frank and Rav Yitzchak Yaakov Weiss, the Minchas Yitzchak. Most agreed with the psak that such travel was forbidden.

The Rebbe had a simple solution for ZIM — the ships could dock overnight at a port and resume the voyage the next day. When ZIM claimed that this wasn’t feasible, the Rebbe pointed out that there were plenty of ports along the Newark-Haifa route where the vessels could dock—for example, in Bermuda and the Azores. Despite all entreaties, however, ZIM refused to halt operations on Shabbos.

As air travel became more affordable and wide-spread in the late 1960s, ZIM discontinued its passenger services to focus on international cargo shipping, which brought this particular issue to an end.