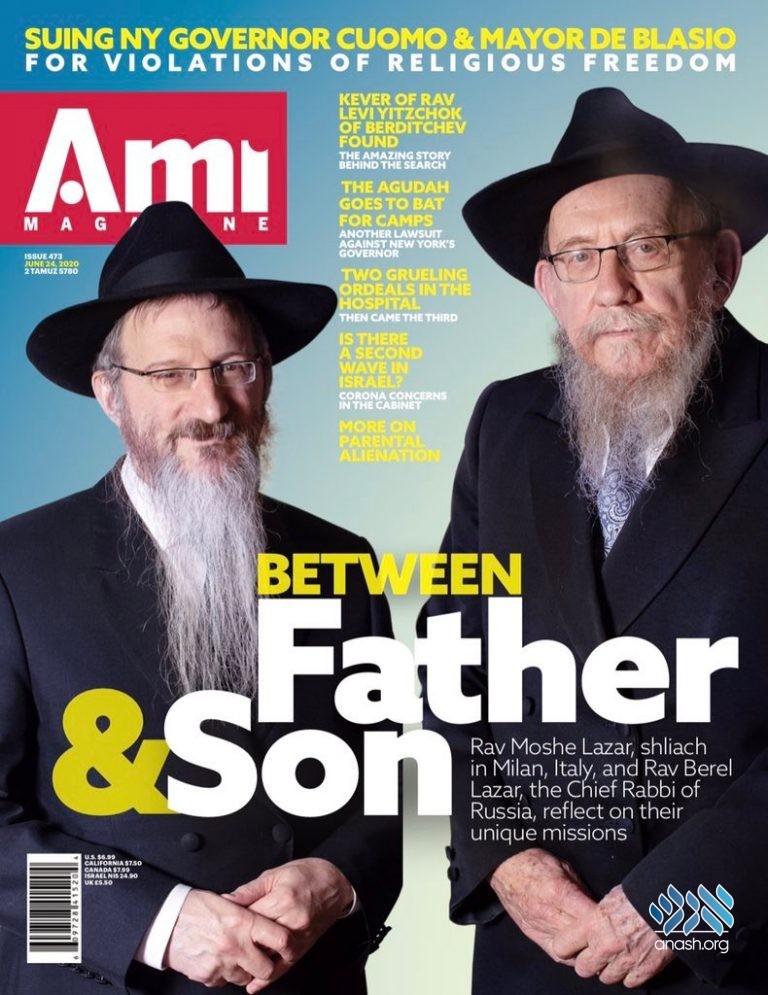 The following is an excerpt from this week’s Ami Magazine:

I remember seeing Hitler as a child when he came to Vienna after the Anschluss,” says Rabbi Moshe Lazar, Chabad shliach in Milan, Italy, and the father of Russia’s Chief Rabbi Berel Lazar. “I grew up in Vienna. My family had been living there for generations. They weren’t chasidim; they were Yekkes.

I saw Hitler when his parade went down the main thoroughfare, which was around the corner from our house. We heard that he was going to be coming to town, and there were thousands of people in the streets. When his car passed by, I saw everyone saluting, so I did too. My sister was standing next to me and she gave me a klop, which I can still feel. The next time Hitler came to town I didn’t raise my hand. By then I already knew that he wasn’t a nice person.

”It’s a breezy Sunday afternoon in the Jerusalem neighborhood of Nachlaot. After knocking on the door of the apartment to which I have come for a meeting, I find myself face to face with Rabbi Berel Lazar, and I feel intimidated. It isn’t often that I meet people who are friendly with Vladimir Putin. Rabbi Lazar welcomes me inside and immediately offers me a drink, putting me at ease. While Rabbi Lazar heads off to the kitchen, his father, Rabbi Moshe Lazar of Milan, enters the room. I stand up to greet him and we make some small talk. The Lazars are in Israel for a family simchah and have agreed to their first-ever joint interview.

“My mother had an uncle in America who was a director for Paramount Pictures,” Rabbi Moshe tells me. “At the last minute, right before the American Consulate in Vienna closed, my mother got in touch with him. He was a wealthy person, and he sent an affidavit sponsoring my father, mother and me. My sisters and brothers were already in England, having gone there on a Kindertransport.

“I’ll tell you how we ended up in Chabad. There was a wonderful Yid with real mesiras nefesh named Reb Shloime Unsdorfer, who was a Bobover chasid. He passed away not long ago. He was in London during the war, and he took care of many of the children who came there from Vienna. He was only a bachur at the time, and I have no idea how he did it, but he got a little house in the town of Staines, on the River Thames, and started a small yeshivah.

In 1943, when my brother had an opportunity to go to America, Reb Shloime told him to go to a chasidishe yeshivah. How many chasidishe yeshivos were there at the time? Only one: Lubavitch, in Crown Heights. So my brother told my father that that’s where he wanted to go. My father thought he was crazy. Torah Vodaas was right around the corner. ‘You’re gonna schlepp to Crown Heights every day?’ he asked him. But my brother nudged my father until he gave in, and if my brother was already going, it only made sense for me to go too. So it’s all to the credit of Reb Shloime Unsdorfer.

“Children today are very fortunate to grow up with brothers and sisters and have friends. I had no one. When I came to America at the age of five in 1939, there were only two Jewish families on Clymer Street in Williamsburg. In those days only Italians lived there. As soon as they saw a yarmulke they’d beat us up.”

“One day, a man with a beard happened to pass me on the street. When he saw my yarmulke he gave me a pat on the head and walked on. I was shocked. Who had a beard in America in those days? That’s what it was like.

“When my brother and I started to travel to Crown Heights every day, we would often stay late to play ball in the yard of 770 Eastern Parkway. Today, there’s a big shul there, but back then it was a driveway. The Previous Rebbe would watch us from his window and smile. He was so happy to see Jewish children playing in his yard! One day, when I went to 770, I saw the same man with the beard who had patted me on the head. I ran inside to find out who he was. ‘Oh, that’s the Ramash, the Rebbe’s son-in-law,’ they said, which is what the Rebbe was called before he became Rebbe. He was a very private person. A lot of people didn’t know who he was. The Previous Rebbe’s other son-in-law, Rav Shmaryahu Gurary, known as the Rashag, was very well known because he ran the yeshivah.

The full article appears in this week’s Ami Magazine.