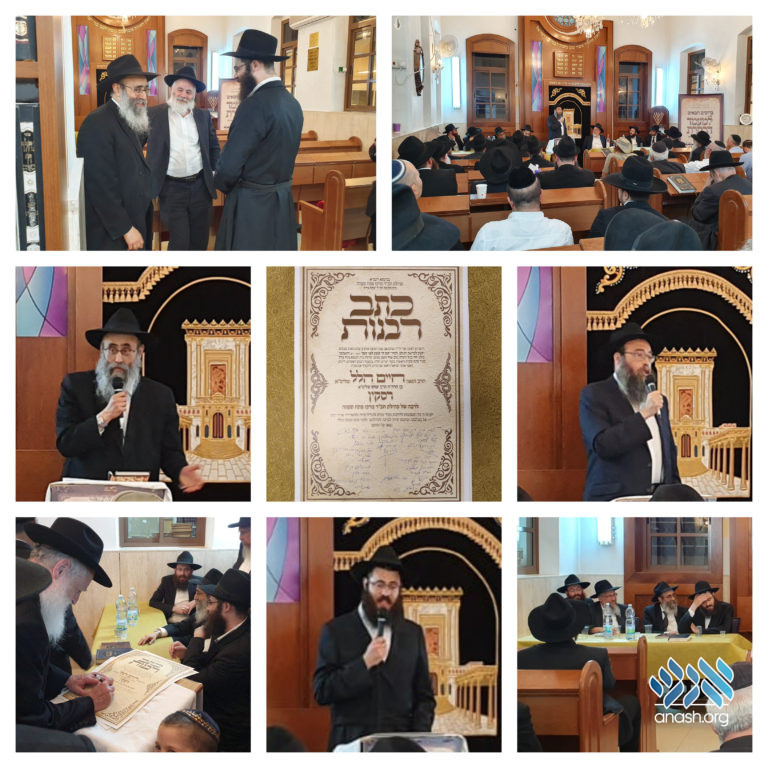 At a ceremonious event, the Anash community of Central Petach Tikvah instated Rabbi Chaim Hillel Raskin as their rov. The shul, which is over 100 years old, was led in the past by illustrious rabbonim, including Harav Moshe Tzvi Naeh and Harav Dovid Chanzin.

Rabbi Raskin, age 36, hails from Burlington, Vermont, where his parents – Rabbi Yitzchok and Zissi Raskin – are shluchim for over thirty years. For over 10 years, Rabbi Raskin studied in-depth halacha at the distinguished Kollel Hora’ah in Rechovot, was certified by Heichal Shlomo Rabbanut, and took shimush from eminent rabbonim, including Harav Moshe Landa a”h. For the last five years, Rabbi Raskin has also served as the halachic columnist for The Weekly Farbrengen publication in English.

The event was honored by the attendance of leading Chabad rabbonim, community rabbonim and dignitaries. The MC was the dedicated community gabbai, Reb Naftali Lipskier.

Harav Menachem Mendel Gluckowsky, member of Beis Din Rabbonei Chabad and rov of Anash in Rechovot, praised Rabbi Raskin’s qualities and was first to sign the ksav rabbonus, the official letter of appointment. Harav Meir Aharon, Rosh Kollel in Rechovot, also spoke of the new rov’s dedication to learning and his breadth of knowledge.