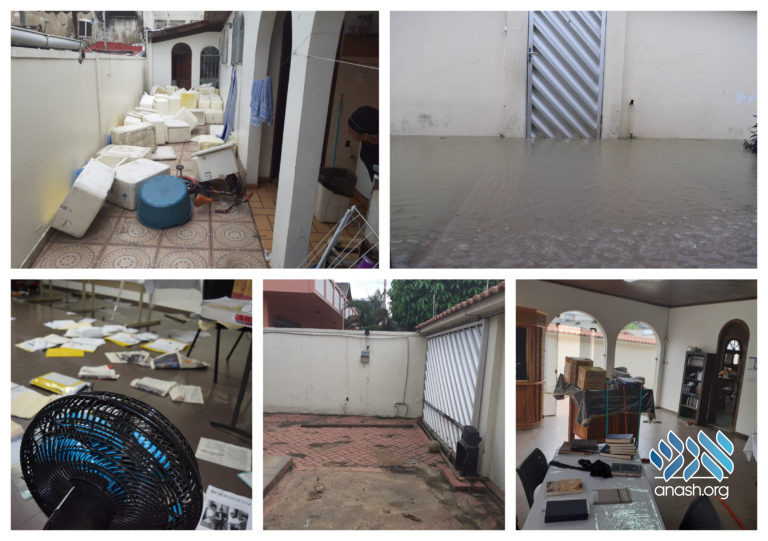 The last Shabbos of the year is when Hashem blesses the month for the coming year. The Baal Shem Tov taught that water is a siman bracha, and one Chabad House got IYH a lot of Brachos for this coming year.

Chabad Manaus is located in middle of the Amazon Rainforest. They service the local and Jewish community members and have been doing so for the past 10 years. This Shabbos the rain just did not stop, and as the community sat together Friday night, for the Shabbat meal the water started coming in.

“It just did not stop, and came to our knees,” said one congregant, Deborah Israel.

There was not one room in the Chabad House that was not flooded. What was worse is the sewer drainage water also came up, stinking up the Chabad House. As the rain continued to poor and community members realized there was no real solution, they continued their meal. They sang and said Dvar Torah’s, and spoke about the flow of blessings the water is bringing to the entire community.

Shliach Rabbi Aryeh Raichman described the damage, “We lost a lot of bookshelves and sefarim, our car was flooded, furniture, food and online school laptops were damaged, and much more. We have to prepare for the large crowd coming Rosh Hashana, clean the house, and somehow get rid of the smell, fast.”

Already a few weeks ago the Chabad House had prepared for an online campaign to raise funds to be able to purchase a property and this flooding was the final straw.

On October 2, the day after Rosh Hashana is their campaign. We have already heard about extinguishing the fires in the Amazon, now it is helping to stop the flooding.