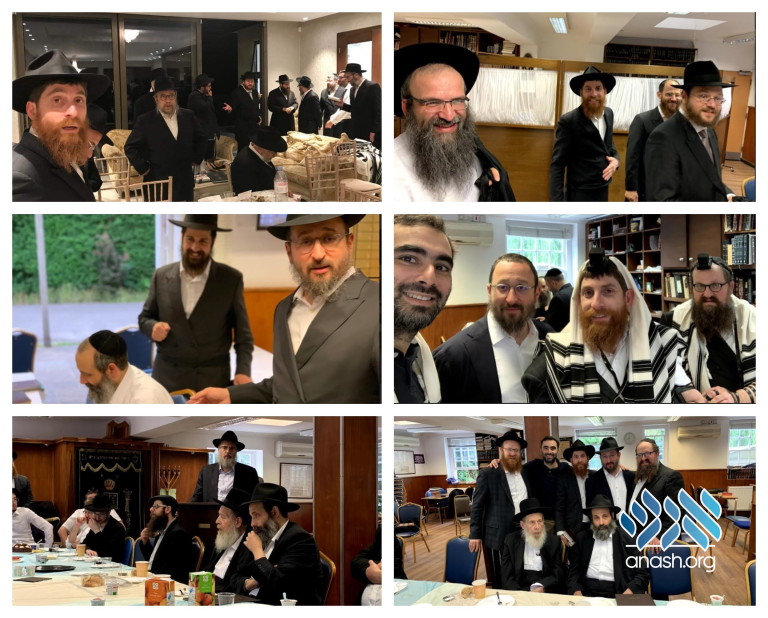 It happens only once in a lifetime. Their mashpia reached his 60th birthday, and the alumni of Yeshiva Gedola Lubavitch London, made sure it counted. A group of friends and yeshiva mates decided to honor their mashpia Rabbi Mendel Gordon who had such an impact on them, with a shabbos together in yeshiva. Like in the old days.

As reported on Anash.org, the committee had been working for the last six weeks, preparing every aspect of the Shabbos. The driving force being the idea of spending Shabbos with Rabbi Gordon was the hakaros hatov so many talmidim feel every day for the care and individual attention they got. Now that many of them are raising bochurim of their own, they see how important their formative years under Rabbi Gordon were.

Dozens of alumni of Yeshiva Gedolah Lubavitch London from seven countries came back to the yeshiva to spend a special Shabbos together. Notable guests included the twins Rabbis Yehuda and Yochanan Butman, shluchim in Eretz Yisrael, who were shluchim in the yeshiva some 30+ years ago.

This gathering was a celebration of the incredible 37-year chinuch career of mashpia Rabbi Mendel Gordon, and a once in a lifetime opportunity to spend a Shabbos together with old friends and magidei shiurim in the place that made them who they are.

The “Kingsley Way” yeshiva community went all out to host the alumni with comfortable accommodations and beautiful meals. The Shabbaton began with a yeshiva style shiur followed by seder niggunim and kabbolas shabbos, and continued with a Friday night meal for the alumni and their mashpia. Songs were sung, Torah shared, and the warm glow of old friends made it an evening to remember.

Shabbos day brought a beautiful kiddush and meal together with the whole community. Nobody wanted to leave, people just sat and listened to zichronos from years gone by. Shalosh Seudos at the home of Nuchi Vogel was just 100% warmth. A beautiful experience b’gashmiyus u’beruchniyus. No better way to describe it.

And through it all, until the end of Sunday’s main event, the grand brunch celebration and journal presentation, Rabbi Gordon farbrenged with his old talmidim. 48 hours spent immersed in an atmosphere of true chassidshkeit, together with the friends and hanholoh and in the storied yeshiva that has made its impact on Chabad Lubavitch by producing talmidim of stature that are today Shluchim and askonim the world over.

The journal was a beautiful outpouring of support from talmidim and friends. Rabbi Hertz’s beautiful letter shows how the yeshiva has been a true example of how the staff in yeshiva can have a true harmonious relationship, even after so many years.

As an added “bonus” the alumni also managed to spend some quality time with their beloved Rosh Yeshiva, Rav Yitzchok Meir Hertz, who has dedicated his life to the yeshiva since its inception and founding. Rabbi Hertz shared with them some of the happenings around the time of the founding of the yeshiva, how he traveled to New York to find a mashpia and was b”h successful in finding Rabbi Gordon.

One might say that the most inspired person was Rabbi Gordon himself. He spoke about how he never believed that he’d be a mashpia of a yeshiva, and when hired didn’t see it lasting this long. He thanked all those who made the effort to travel from near and far: “You came to be inspired, but in the end you inspired me,” he said.

Throughout the shabbos, whenever anybody got up to speak, everybody also mentioned Rabbi Hertz and the impact he’s had as well, instilling a love of learning in the bochurim and caring about them and their accomplishments.

Committee members who helped organize the shabbos and the event journal included: Moshe Bleich, Levi Matusof, Reuven Hann, Yossi Rappoport and Chaim and Nuchi Vogel. Each contributed in his own ways and with his talents, kol echad b’shmoy hatov yevorach.