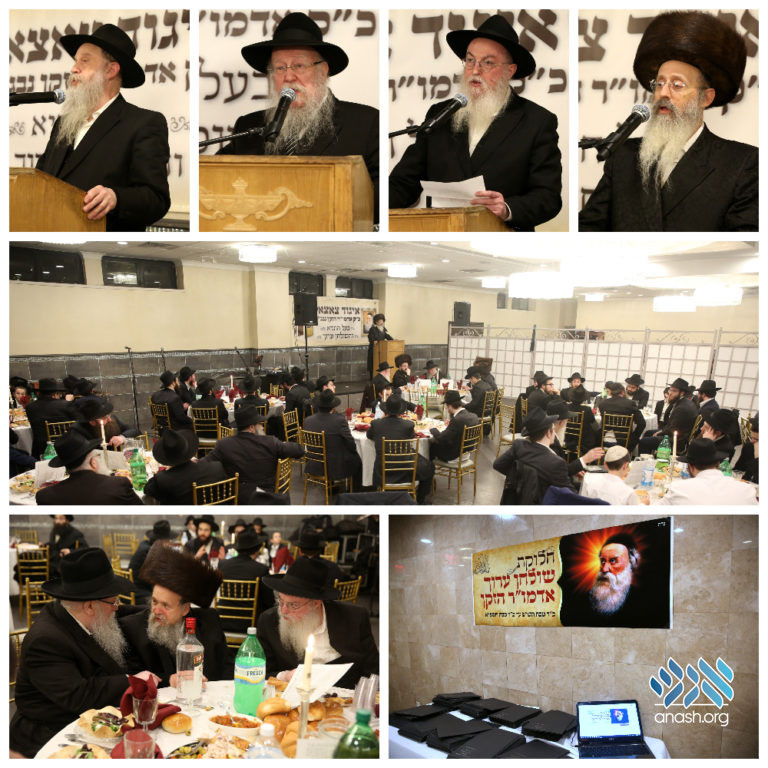 200 descendants of the Alter Rebbe gathered at a special Melave Malka, where they heard about his life and teachings, sang his nigunim, and divided his Shulchan Aruch.

Over 200 Tze’etzoim, descendants, of the Alter Rebbe assembled for their annual melaveh malka this past motzaei Shabbos. Among the attendees were Chabad Chassidim, members of other Chassidic groups, as well as members of the  all united with the great privilege of numbering among the Alter Rebbe’s descendants.

The gathering opened with remarks by the MC and organizer of the event, Rabbi Shmuel Butman, chairman of the Association of the Descendants of the Alter Rebbe, and director of the Lubavitch Youth Organization.

In the word “Vetzeotzoeinu,” the Rebbe explains, the Alter Rebbe put in his son and successor, the Mitteler Rebbe, together with all descendants throughout all generations. We thus see that all the Tze’etzoim, throughout all the generations, are included in one and the same word!

The Rebbe concluded that sichah by saying: “In order that the gathering of the descendants and their resolutions to follow in the Alter Rebbe’s ways be with additional success, they should take a bottle of mashkeh for the gathering from the present farbrengen, which has a special connection with the Alter Rebbe, being held the day before the anniversary of his passing.” The Rebbe then handed the bottle of mashkeh from his table  to be used for the melaveh malka.

Rabbi Butman announced a worldwide initiative of dividing the Alter Rebbe’s Shulchan Aruch to be studied collectively in its entirety within the coming year. A website (AlterRebbe.org) has been set up where one can commit to study a section and download the relevant pages in PDF format. Throughout the year, reminders will be sent to the participants regarding their commitment.

This campaign unites Jews across the globe in the study of the Alter Rebbe’s teachings and enables the Shulchan Aruch to be concluded multiple times.

Elegant folders were prepared with booklets according to the above division and distributed amongst the descendants who each committed to study parts of the Shulchan Aruch written by their ancestor—the Alter Rebbe.

Applying the teachings of the Alter Rebbe

Rabbi Dr. Bentzion Twersky, grandson of the Tzadik R’ Mordechai Dov of Hornesteipel, spoke of the special mission of the Alter Rebbe, and after him all Nesiim of Chabad,  to worry for all Jews independent of their present status of observance. He brought a story of the Alter Rebbe that some Chassidim wanted to distance themselves from a certain individual due to his personal conduct. The Alter Rebbe said what they should do is look for ways to bring that individual closer. “Those stories have made a tremendous impact on me and I use them in my professional practice.

The great privilege and responsibility

Rabbi Yochanan Twersky, a descendant of Reb Mordchai Dov of Harnasreipel and a Dayan in Beis Din of Kav Hayoshor, spoke about the great and sublime privilege of being a descendant of the Alter Rebbe. “this is a great privilege that comes with a great responsibility.”

To be a shining example

“Anyone who is privileged to be a descendant of the Alter Rebbe has the unique responsibility to be a personal shining example.”

Participating was the Matosdorfer Rov, Horav Dovid Arye Ehrenfeld, a descendant of Reb Yosef Yitzchok of Avrootch, Son of the Tzemach Tzedek and  a delegation headed by the son of the Skverer Rebbe of Boro Park.

A siyum on the Alter Rebbe’s Shulchan Aruch was made by Rabbi Shlomo Yehuda Segal, a Dayan in Crown Heights and descendant of the Alter Rebbe’s son Reb Moshe. He learned the final halacha and spoke about a related sichah of the Rebbe that discusses the desire of the Jewish people to be connected with Hashem at all times regardless of their situation. Rabbi Segal also told a personal story from one of the descendants of the Alter Rebbe.

Rabbi Michoel Seligson, an author and mashpia, son of the Rebbe’s doctor R’ Avrohom Aba Seligson z”l, a descendant of the Alter Rebbe, began the study anew by learning the first halacha and quoting the Rebbe’s explanation why the Shulchan Aruch begins with “Yehuda ben Teima says…” for every Jew is constantly thanking Hashem (related to the name Yehuda).

Distribution of the Shulchan Aruch

As mentioned above, special folders were prepared in advance, each including a part of the Alter Rebbe’s Shulchan Aruch, to be finished by the 24th of Teves 5781. A computerized label on the cover indicated which section of halachos and which chapters are contained in the folder.

As a continuation of the division among the descendants, it is now being offered to the community at large, and everyone can participate by signing up at Alterrebbe.org and choosing the section they want to commit to study.

The Alter Rebbe teaches that a nigun enables a person to rise above and transcend any limitations they may find themselves in.

The descendants sang the ten nigunim of the Alter Rebbe with great awe and inspiration, led by Rabbi Yosef Zirkind with his sweet and pleasant voice. He is the son of Rabbi Yitzchok Zirkind z”l—son-in-law of Rabbi Yitzchak Dovid Groner z”l—who would regularly attend the annual gathering.

Accompanying music was played by the renowned musician Choni Milecki, whose grandfather Reb Elchonon Marasow received from the Rebbe Rashab the tradition of the ten melodies composed by the Alter Rebbe and the fame musician Yehuda Piamenta who accompanied the singing on his flute.

At this time the chairman announced what the Frierdiker Rebbe said that singing the nigun of the Arba Bovos, four movements, of the Alter Rebbe is like sending a Pan (personal petition) to the Alter Rebbe.

This was the highlight of the evening. “It is impossible to describe the unique atmosphere palpable in the room when the nigun was being sung,” said one of the descendants. It was an uplifting moment when the participants felt elevated above the limitations of the physical world.”

Rabbi Butman concluded the evening by thanking his son Rabbi Yosef Yitzchak Butman for his help in organizing the melaveh malka and blessed him that the merit of the Alter Rebbe should assist him in all his endeavors.

The descendants left the melaveh malka with the strong feeling that the Alter Rebbe, the first of the Chabad Rebbeim, began the work to prepare the world for Moshiach and that the Rebbe, the seventh, explicitly told us that we are standing in the final generation of golus and the first generation of the geulah, may it take place speedily!