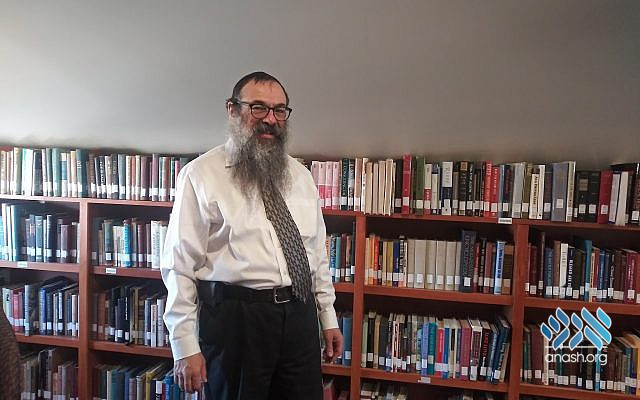 After thirty years of finding and implementing sentencing alternatives for Jewish inmates, Rabbi Moishe Mayir Vogel has found a way to widen his reach.

For the past three decades, Rabbi Moishe Mayir Vogel has worked to find sentencing alternatives for Jewish community members convicted of non-violent crimes, avoiding harsh jail sentences that would wholly dismantle their lives and the lives of their families.

Now, he is using his expertise to help those in the African American community as well.

Thanks in part to a 2018 grant from the Pittsburgh Foundation, Vogel has expanded the reach of his program, working hand in hand with African American faith leaders and others to find effective alternatives to prison.
Taking on federal, state and local cases, Vogel, executive director of the Aleph Institute-North East Region, and his team advocate to avoid life-destroying punishments, emphasizing rehabilitation instead.

“All these years we were doing all Jewish clients,” said Vogel. “However, because we received the foundation money to do it not only for the Jewish inmates, we are now working with other agencies, non-Jewish agencies to help organize it in their communities too.”

In addition to the foundation funding, Aleph receives funds from Allegheny County to provide casework services to assist in alternative sentencing and reentry programs. So far, Vogel is working with about six African American clients in addition to those who are Jewish.

“Alternative sentencing should be for not only Jewish, but for everyone,” stressed Vogel.

Aleph, located in the heart of Squirrel Hill, also provides Narcotics Anonymous and Alcoholics Anonymous programming, assistance in finding housing and employment, and help in accessing healthcare to those who have been incarcerated and their families.

Aleph has had a “100% success rate” in securing employment for participants in its Alternative Sentencing Program, and, for program participants without an alcohol dependency issue, “there is a 100% success rate in keeping the family units intact for ASP participants,” according to statistics provided by Aleph.

Vogel is now partnering with Rev. Tim Smith of the Center of Life in Hazelwood and with leaders of the Birmingham Foundation, “putting together a program where we agree our caseworkers will oversee that the individual will go to 12-step programs, will go to anger management, will go to parenting classes, will go to other programs that are available,” he explained. “We will oversee it and see that it works hand in hand with parole and other agencies to make sure that the individual has the resources. We find them jobs, get them back into the community, get them back into a healthy part of the community, with them going back to their faith-based program, whichever it is, and helping them become productive members.”

Alternatives to jail gives these people “another chance,” said Vogel. “So many of these kids on the streets have not been given a chance. They didn’t graduate high school, there is no one holding their hand to help them get their GED. They need to be directed and walked with as they go through it, and they 99.9% want to be productive members of society. They just need someone to hold their hands, and we are the hand-holder.”

The meetings between the two groups have focused on “the effects of trauma on the mental and physical health of young individuals and how we could use programs from the Jewish community that could be beneficial to the African American community, and how events occurring in the African American community could be made available for educational purposes for Jewish youth so they could become more cognizant of issues that black kids are growing up with,” said Rabin, a longtime professor of pathology at the University of Pittsburgh.

Rabin was inspired to convene the meetings between the two communities following a program last spring at the Center for Victims during which he spoke about the effects of trauma on a community.

“That motivated me to bring people together to start talking about this, to show the black community that we are concerned and we want to do things, and in exchange we want help in educating our children about issues in the black community, so that when they grow up they will be involved in helping other people and not growing up in isolation.”

During those meetings, “one of the things that was quite obvious was the wonderful success Rabbi Vogel has had, and that the African American community could learn and benefit from what he is doing, and hopefully utilize his program to help black individuals avoid incarceration,” said Rabin.

The Center of Life’s Smith, who has spent the last 30 years working to reverse the disproportionate incarceration of young African Americans, said his recent collaboration with Vogel has been valuable.

“It is obviously very important work and it’s important to me because what I have seen as an African American is a disproportionate amount, particularly of young men, get put in jail for very small offenses and actually sit in jail for long periods of time, without any good representation,” Smith explained. “Some of them don’t have a good understanding of the law, they don’t have the money to get a lawyer, the public defenders don’t really do a very good job for them. So being able to have some resources out there that we can tap into that will help to represent some of these folks is really invaluable.”

The two faith leaders have been working together for the release of a man who has been incarcerated since the 1960s. The man, who is dying from stage four cancer and other diseases — and who wants to spend his final days with this family — was arrested and imprisoned at the age of 17 for being in a stolen car. While in prison, he ended up killing two members of the Aryan Nations in self-defense and received multiple life sentences as a result.

“That was a black man who gets arrested in the 1960s for being in a stolen car, then gets triple life,” said Smith. “The reason why he killed these other guys is because they were trying to kill him. That’s the nature of the environment in prison. There is no real justice done here, it’s just somebody going through the system.”

Smith and Vogel are “working together to see how many people we can help, through either getting somebody to look at their case again, or get them out so that they can spend the rest of their time with their family,” Smith said. “We have found a way to work together and that means a lot.”

Allegheny County has joined in the push for alternative sentencing, Vogel noted. Just last week, the county published its year one report for the John D. and Catherine T. MacArthur Foundation Safety + Justice Challenge, a “national initiative to prevent the misuse and overuse of jails,” with stakeholders in the criminal justice system “working collaboratively to reduce the number of people entering jail and those staying in the jail longer than necessary,” according to a press release.

As a result of the work in Allegheny County during this first year, the jail population was reduced by 7%.

“Everyone has come to recognize that prison is not the solution for every crime,” noted Vogel. “Not only is it not the solution, it’s very destructive. Even taking an individual out of society for three months, which is comparatively very small, is very destabilizing and ruins an individual terribly. He loses his job, it strains his relationship with this family. All of a sudden his family has to find resources to cover months without working. It’s very damaging.”