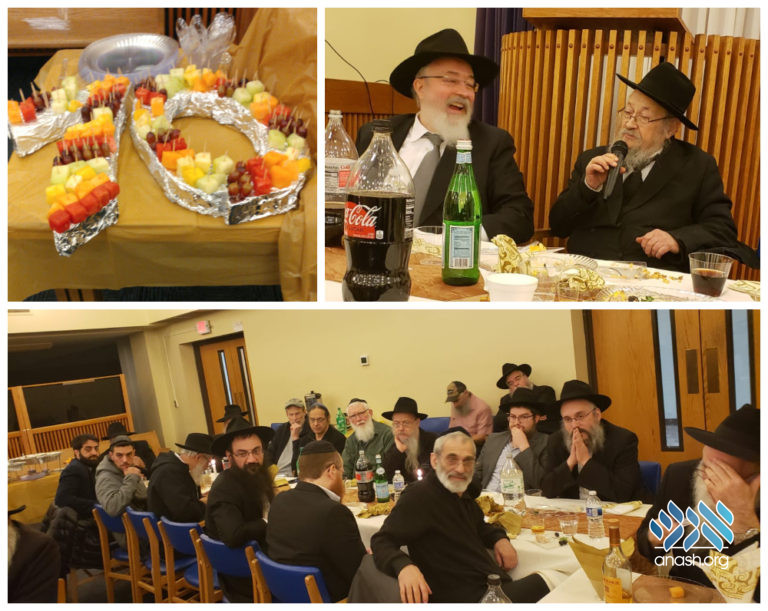 Rabbi Yosef Greenberg, head shliach to Alaska, related memories from when he was working on a sefer about the Rebbe’s early years at a farbrengen in Minnesota.

The Lubavitch community of the Twin Cities, Minnesota gathered this past Wednesday for a farbrengen with guest speaker Rabbi Yosef Greenberg, head shliach to the state of Alaska.

The farbrengen was sponsored by Upper Midwest Merkos and Adath Israel Synagogue, and was skillfully arranged by Rabbi Mendel and Nechama Dina Feller.

Rabbi Moshe Feller, head shliach to Minnesota spoke of the meaning of the holy day of Yud Shevat, and the significance of the 70th year of the Rebbe’s leadership.

Rabbi Yosef Greenberg then addressed the farbrengen and kept the crowd enthralled for hours with stories, memories of his years by the Rebbe and farbrenging about hiskashrus to the Rebbe.

Rabbi Greenberg related how when he was working on the sefer Yimei Bereishis, he found a letter written by one of the older chassidim of the previous generation who wrote that everyone clung to the Rebbe like bees to honey. Rabbi Greenberg recalled that Rabbi Norman Lamm and his wife visited his Chabad house almost 20 years ago, Mrs. Lamn related that when she used to live in Crown Height in the 40s, people use to walk out of their houses to watch the Rebbe walk down the street!

Rabbi Greenberg explained that Chassidus teaches that a Rebbe is the connecting force between the Yidden and Hashem. As was the case by Har Sinai, the Torah says “I [Moshe] stood between the Hashem and you”, the Rebbe of each generation had the same role. Therefore when a yid saw the Rebbe, it “electrocuted” him, making him feel his neshama and his connection to elokus.

Rabbi Greenberg said that we must all know that just as the Rebbe said regarding the Frierdiker Rebbe, that his mission on earth did not end with his physical departure, the same applies to us. The mission statement the Rebbe laid out in Basi Legani is as relevant as ever, and we are part of Dor Hasvi’i and must act in accordance with that knowledge.