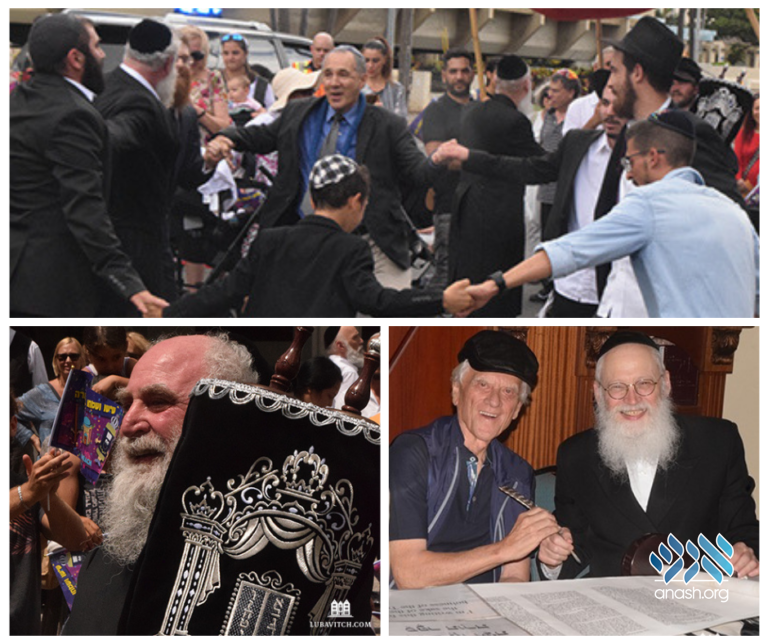 by Mussi Sharfstein for Lubavitch.com

She’ll never forget the night the Torah scrolls were stolen from the Chabad Center of Honolulu, Hawaii. “It was traumatic,” remembers Perel Krasnjansky, director of the center with her husband Rabbi Itchel. “It rocked the entire Island. Things like this just don’t happen in Hawaii.”

That was in January 2018 and though a $10,000 reward was offered and every avenue exhausted, law enforcement and private investigators have yet to find the two scrolls, each valued at approximately $40,000 each.

A few days after the incident, the Honolulu Jewish community came together for an evening of solidarity. People from every congregation and across the spectrum of observance came to show their support. “At the event, we promised to grow from the incident and replace the stolen scrolls with four new ones, double the amount,” shared Rabbi Krasnjansky. “But it’s Hawaii and we’ve lived here thirty-two years,” Perel inserts, “I was very skeptical that we could pull it off, to say the least.”

Last week, the community celebrated the completion of their fourth new Torah scroll.

The first scroll came to Chabad of Kailua Kona, the Big Island, nearby. Fortunately, before the theft, Chabad of Honolulu had loaned a Torah to Rabbi Levi and Fraidy Gerlitzky of Chabad on the Big Island and they returned it that day so there’d be no interruption in services. A few weeks later, Sheila Gerstman, a New York resident who spends a month on the island each winter, heard the saga at the Gerlitzky’s Shabbat table and committed to sponsoring a Torah in memory of her parents, so the Big Island could have their own. The community welcomed it that summer.

The second and third scrolls came in a grand celebration on April 7. Donors from all over the world contributed to the campaign to commission the Torahs. “People from as far as Holland were sending donations and messages of support,” Perel says. The streets were blocked off as 130 people—a major crowd for the island—danced through the streets, welcoming the scrolls to their new home.

Three months later, on July 18, a fourth scroll was donated. Ben and Lior Mamon, a young Israeli-born couple, who credit Chabad of Honolulu with introducing them to a “completely new perspective of Judaism,” commissioned a Torah dedicated to children. “The whole community felt terrible when the Torahs were stolen and, as a staunch supporter of Chabad, I knew I had to do something to help,” Ben shared. His friend had recently sent him a video clip of a talk of the Lubavitcher Rebbe on the idea of promoting unity among Jewish children by commissioning a Torah dedicated specifically to them. The children buy a letter for a minor symbolic fee and “own” a letter in the Torah. “The idea touched me,” he remembers. “I felt like I had missed out in getting a letter when I was a child and I wanted my one-year-old son, Adam Uriah, and all Jewish children, to have this opportunity.”

The streets once again were closed off for a parade. One hundred people, mostly from the Israeli community, came to celebrate with the new Torah. “It was like a dream, like my wedding day,” Ben says. The last letters of the scroll were written by a child of Hawaii himself. Rabbi Tzvi Krasnjansky, now a scribe, is the couple’s son who was born and bred on the island. “It was beautiful to see the full circle: the first Chasidic child of Honolulu completed the Torah for Hawaii’s children,” Perel says.

“If your child doesn’t yet own a letter in a Torah scroll,” Ben says, “Let us know. We’ll arrange it and send a certificate.”

A year and a half after the devastating theft, the first two scrolls have still not turned up. Perel says she gets asked about them all the time from “random people at the grocery or on line at the post office.” But the community takes pride in the four scrolls they wrote in response to the incident, and the way they grew from it.