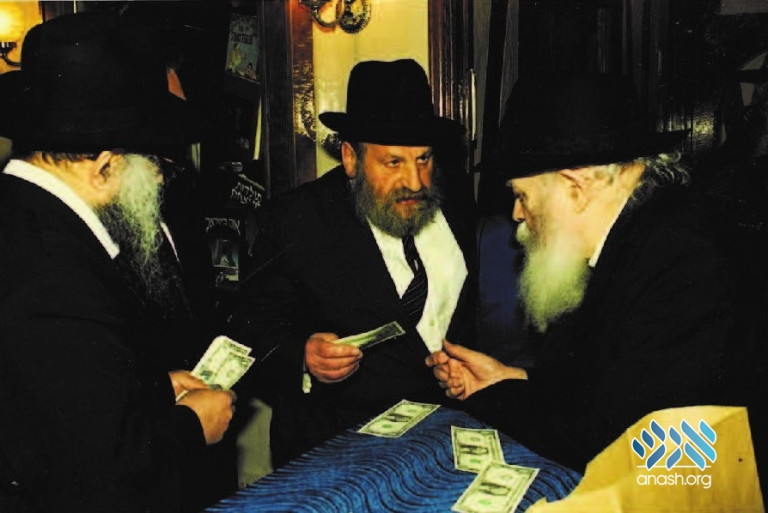 In connection with the 30th yahrtzeit of R. Yisroel Duchman, on Shabbos 6 Iyar, we could bring you some anecdotes from his life.

In 5714 (1954), R. Yisroel and his family immigrated to America and settled near the Rebbe in Crown Heights.

On his first Shabbos, the Rebbe searched for him at the farbrengen but did not see him. When the Chassidim heard that the Rebbe was looking for R. Yisroel, they thrust R. Yisroel onto a table. The Rebbe smiled and said, “He hasn’t had time to rest from the trip and he already wants ‘shishi’ (a prominent aliya)…”

Thus began a relationship which became a focus in R. Yisroel’s life. He would say: “Some people live to make business deals, others devote their energy to the stock market, and others live for their professions. My vitality is from spending time speaking with the Rebbe.”

In the beginning, R. Yisroel took a job in a butcher store, but wanting to have more control of his own schedule, he started his own poultry business. When he started his business, the Rebbe gave him a $50 bill. In his unique manner, R. Yisroel told the Rebbe, “If you’re giving the money to help in the business, what can $50 buy? And if you’re giving it to become a partner in the business, then, one dollar is also enough.”

At the Rebbe’s Side

However, what excited R. Yisroel most was to be at the Rebbe’s side and assist him.

Every Rosh Hashanah since arriving in the US, the Rebbe would walk with masses of Chassidim from 770 to the Brooklyn Botanical Gardens where they would recite tashlich over a pond. On Rosh Hashanah 5717 (1956), there was a torrential downpour, but this did not stop the Rebbe and the Chassidim from walking to tashlich. Drenched to the bone, they arrived at the park to find the gate locked. The Rebbe was not deterred and decided to scale the enclosure. R. Yisroel, always at the Rebbe’s side, cupped his hand for the Rebbe to insert his foot and he hoisted the Rebbe up the wall.

On Erev Pesach, in the afternoon, the Rebbe would personally distribute a piece of matzah to each member of the Chassidic community. R. Yisroel would take matzah not only for himself but also for the Yiddish writer Chaim Grade. Though Grade lived several hours from 770, R. Yisroel would always make the journey so that the writer would have the Rebbe’s matzah for the Seder night. Chaim Grade was very appreciative of the matzah, and he would send back greetings to the Rebbe and a poem or short story as a present. On the second night of Pesach, R. Yisroel would approach the Rebbe and give him regards from Grade and the gift that he sent. The Rebbe would always press R. Yisroel for details on their interaction.

Chaim Grade passed away after Pesach of 5742/1982. The following Pesach, R. Yisroel still approached the Rebbe and told him a story. The Rebbe listened patiently, but when R. Yisroel finished, he asked why he had told him the story. R. Yisroel answered: Every year at this time, he would come to the Rebbe and share something from Chaim Grade. Now just because Grade passed away, was it fair for him to lose his opportunity for a private moment with the Rebbe?

“Yisroel and the King Alone”

This expression is used to describe the unique relationship shared between Hashem and the Jewish people on Simchas Torah. Likewise, Simchas Torah stands out as a special time between R. Yisroel and the Rebbe.

On Simchas Torah morning, R. Yisroel would lead Shacharis, and then before hakafos, he would joyously recite kiddush over mashkeh. He would enter with two large trays of cake that his wife had prepared, encouraging everyone to take a bite. Thus began the day of exuberant celebration in 770.

The Rebbe enjoyed R. Yisroel’s natural Chassidic happiness, and when R. Yisroel was more subdued, the Rebbe would motion to him, seeking an explanation for the change.

One year before Yom Tov, R. Yisroel had seen a doctor because of a medical condition. Noting R. Yisroel’s restrained conduct, the Rebbe asked how the appointment went. “It’s his fault,” R. Yisroel told the Rebbe. “The doctor told me that I can’t drink. He’s a yukel!” The Rebbe smiled and asked: “Who went to who? Who paid who?” And before R. Yisroel could reply, the Rebbe added: “So who’s the yukel?”

On another occasion, R. Yisroel told the Rebbe that they had guests visiting for Simchas Torah who were not that familiar with the Chassidic lifestyle. His wife, fearing the impression they would get of R. Yisroel, had advised him to restrain himself. Hearing his explanation, the Rebbe responded: “Du zolst nispael veren fun zei?! Zei zollen nispael veren fun dir!” “You be impacted by them?! Let them be impacted by you!”

In 5749 (1988), the last Simchas Torah of R. Yisroel’s life, he came to the Rebbe’s hakafos after many l’chaims. As always, he and the Rebbe shared a lively interchange. The Rebbe noticed that R. Yisroel was sweating profusely and gave him his handkerchief. (When his son Sholom joked later that he would now have a precious inheritance after 120 years, R. Yisroel replied, “No, the handkerchief will go with me.” When he unexpectedly passed away later that year, it was indeed laid over his face in his final resting place.)

His commitment to the Rebbe motivated him to take steps that took him beyond his personal leanings. When the Rebbe announced the campaign to study three perokim of Rambam a day, R. Yisroel made it a point to attend the shiur given in 770 every night. And at the conclusion of the first year’s study, it was with great pride that he sponsored the grand siyum in 770.

Selected from As I Heard Them, stories by R. Zalman Duchman. Available online here.