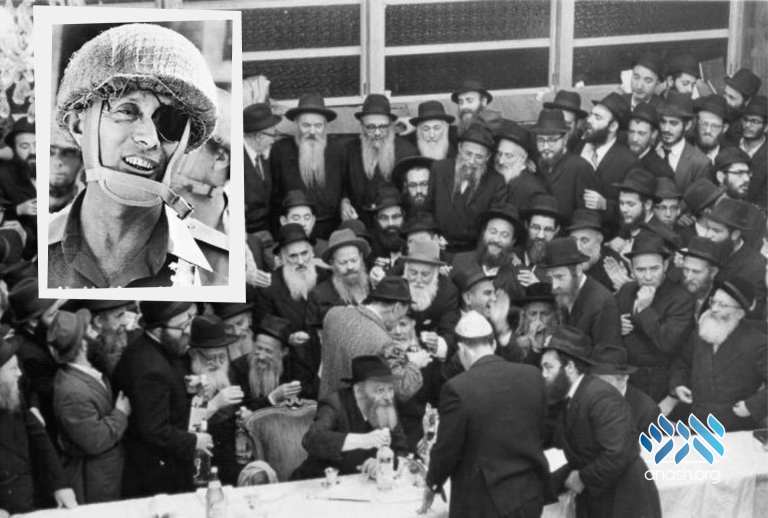 When General Moshe Dayan was suffering from a recent car accident, Gershon Ber Jacobson guided him on how to be healed.

By the Avner institute

It was 1968. As a reporter, I travelled to many places. This time I went to Israel, still flush with victory after the Six Day War, in order to meet with defense minister and famed general Moshe Dayan. I was especially eager to congratulate the general for his military exploits and heroism that rescued the little nation the previous year from savage destruction.

We arranged a meeting by Ammunition Hill, in Jerusalem. The defense minister tried to be friendly, but was clearly struggling with physical discomfort. I knew he was still recovering from a recent car accident, which made me doubly grateful that he took out the time for me.

We shook hands, and I saw him wince. I asked, “Mr. Dayan, how are you feeling?”

He grimaced. “I am not feeling totally better from the crash. I still feel pain from time to time.”

“If you want,” I ventured, “you could write a pidyon nefesh to the Lubavitcher Rebbe.”

“It’s a note Chassidim send to their Rebbe to ask for a blessing.”

Moshe Dayan, ever the secular Israeli, shrugged. “I don’t know about these things. Writing a pidyon nefesh? I’ve never really done it.”

Although hesitant, I managed to press further. “I’m flying back soon to New York. Why don’t you try it? If you’re interested, give me a bottle of liquor. When I get to the Rebbe’s farbrengen, I’ll place it on the Rebbe’s table. And you’ll get a blessing.”

Diffidently Moshe Dayan removed some Israeli bills from his pocket. “Here. Go buy a bottle of liquor and place it on the Rebbe’s table in my merit.”

Back in New York, I sat among hundreds in the cavernous hall of 770, hearing the voice of the Rebbe at the farbrengen. Somehow, I made my way through the sea of bodies and placed the mashke, the liquor, on the Rebbe’s table.

“Rebbe, this is from Moshe Dayan,” I said.

The Rebbe turned to me and asked, “Reb Moshe son of whom?”

I suddenly felt at a loss of words. I had forgotten to get the mother’s name!

A yeshiva student saved the day. A young Israeli, seated not far, approached me and gave over the mother’s name. Apparently, he had known a lot about this famous general, a hero and patriot to so many of his countrymen. This young man was definitely my personal hero – someone whose presence within earshot of the Rebbe and me was clearly Divine Providence.

The Rebbe then raised his cup and said, “L’chaim, Moshe ben Devorah Leah. May he have a refuah sheleimah, a complete recovery!”

Afterward, the Rebbe returned the bottle of mashke to me and asked that I make sure it got back to its rightful owner, the defense minister.