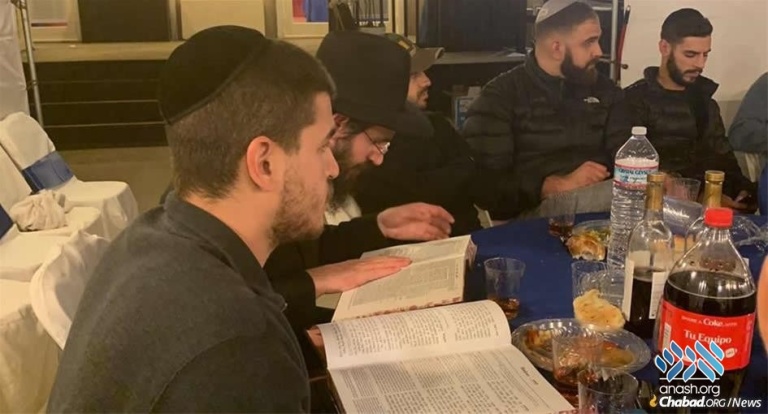 Professional opportunities in the high-tech and housing industries have made the burgeoning suburban San Francisco, Cal., area a magnet for many young Jews from around the world, and Inon Cohen, an Israeli in his twenties, has been attending programs and events at Chabad of Contra Costa for a number of years. Raised in a traditional home, Cohen says he identified strongly with his Jewish roots and sought to be involved with the Jewish community of Contra Costa in whatever way he could. But two years ago, on the day of Hoshana Rabbah, a holy and auspicious day preceding the joyous eve of Shemini Atzeret and Simchat Torah, he received a call from Israel that would change his life forever.

He learned that his father, a well-known and respected teacher at a yeshivah in Jerusalem, had passed away from a heart attack while in his Sukkah. Shaken and full of grief, the young man found himself at the Chabad House the following day. Pouring out his heart to Rabbi Dovber Berkowitz, Cohen explained that just a few weeks earlier, his father had started a class on the Talmud Tractate Berachot via Skype with him and his friend. The online class which took place in California at 7 a.m. and for his father in Jerusalem at 9 p.m., was a powerful and meaningful bonding experience for father and son and Inon was eagerly look forward to the classes.

Genuinely moved by the story he shared, Berkowitz recalls telling Cohen that: “Your father started this class. It is our job to honor his legacy by continuing the class each week.”

“Cohen passionately agreed,” says Berkowitz, co-director of Chabad of Conta Costa with his wife, Chaya, “and turned the class into his personal project to which he eagerly devoted himself.

“From then on, I took on the responsibility of teaching the class,” says Berkowitz. The outpouring of communal involvement and growth that took place as a result was truly beautiful to witness. People who had been only briefly involved in the activities at the Chabad House, eagerly joined. People from out of town who were visiting wanted to be involved. Many connections were formed between members of the community and the Shiur took on a very beautiful and unifying role.”

This year, the eve Hoshana Rabbah, Saturday October 19th, marked two years after the start of the class, and one year since Cohen’s father’s first yahrtzeit. Having completed the entire Tractate of Berachot, we held a special completion ceremony in the Sukkah to honor Inon’s father’s legacy. “

The ceremony, at the climax of Sukkot, the holiday of joy is a true testimony to the ability we each possess to turn our greatest challenges into springboards for growth and pillars of strength,” says Berkowitz. “The weekly shiur has brought the community together in such a beautiful way and the siyum was a fitting testimony to the Jewish people’s bond to each other and to G‑d.”