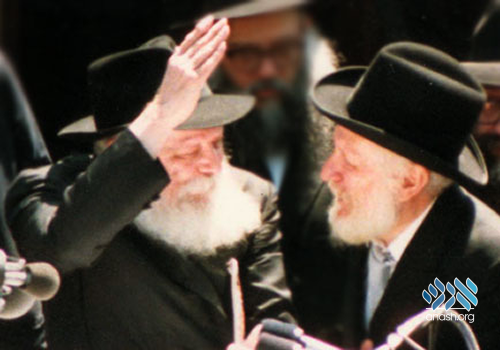 A Moment with the Rebbe: At the conclusion of a Lag B’Omer Parade, Rabbi Yankel Hecht approached the Rebbe and thanked him for his words of encouragement before the parade and pulling him out of his despondent mood. The Rebbe’s response sheds light on the role of a Rebbe.

As the preparation for the 5747 (1987) Lag BaOmer parade were in full swing, Reb Yankel Hecht was fretting. The pressure of the many logistics, coupled with this being the first internationally televised parade, drew him down.

In his direct style, he wrote a note into the Rebbe, and received a response with warm words of encouragement. Rejuvenated, he continued the work, and indeed oversaw a great, successful production.

As the Rebbe turned to leave the parade, Reb Yankel approached to express his appreciation. “Der Rebbe hot mir aroisgeshleped fun mara shechoira” (The Rebbe pulled me out from gloom).

With a broad smile, The Rebbe corrected one word, “Ufgehoiben!” (Uplifted!). The Rebbe repeated it again, making a motion with his hand.