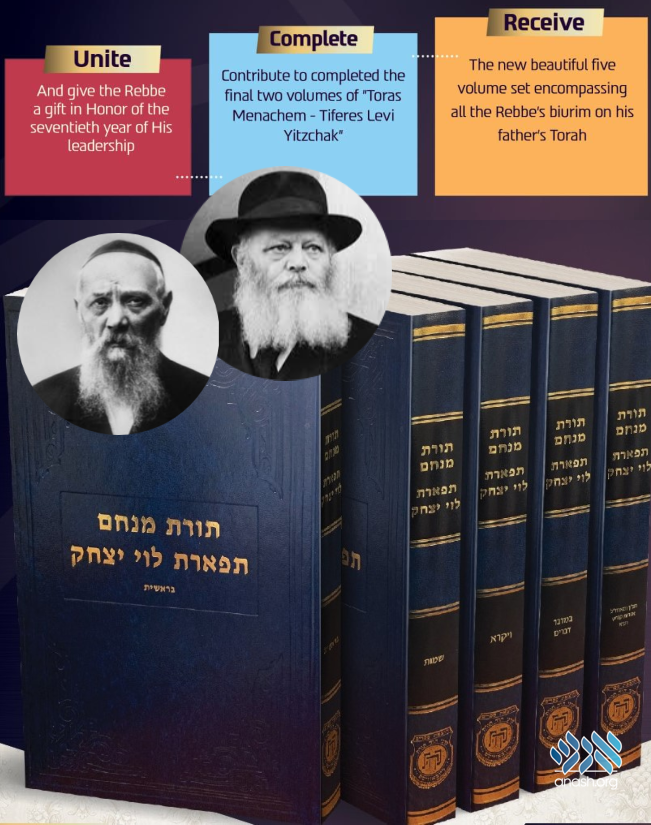 With the approach of the Yud Shevat – 70 years, Lahak has announced a new initiative to participate in the publishing of Toras Menachem – Tiferes Levi Yitzchak, and receive your own five-volume set. Also: When did the Rebbe first allow the use of the name “Toras Menachem”?

Anash and Bochurim worldwide are gearing up for Yud Shevat, the 70th anniversary of the Rebbe’s leadership. Alongside communal and personal campaigns, Lahak Hanochos has proposed a general initiative in which each person can participate and give the Rebbe a unique gift: The publishing of all his Sichos on the Torah of his father, Horav Levi Yitzchak Schneerson.

The Rebbe’s love for his father’s teachings is well-known. Beginning in 5730, when Horav Levi Yitzchak’s Torah was first published, the Rebbe began to quote and expound on a segment of his Torah during every Shabbos farbrengen; asking questions, proposing answers and learning lessons in Avodas Hashem.

Exactly 30 years ago, between Hei Teves and Chof Daled Teves of 5750, the first Sefer of his explanations – on Sefer Bireishis – was ready for print. On that occasion, Lahak presented the Rebbe with a suggestion, signed by chief-editor Rabbi Dovid Feldman, to call the Sefer “Toras Menachem – Tiferes Levi Yitzchak.”

To their great surprise and joy, the Rebbe agreed to the proposal, marking the first time the Rebbe allowed his name to be incorporated in the titles of his Seforim.

From that day on, Toras Menachem serves as the general title for all of the Seforim in the Rebbe’s Torah: Sichos, Maamarim, Hadranim, and so on, from 5710 through 5752.

In recent years, alongside the continued publishing of Toras Menachem according to the years of the Rebbe’s leadership (currently 67 volumes from 5710-5732, and 43 volumes from 5742-5752), the Lahak editorial board has invested significant efforts to conclude the set of Toras Menachem – Tiferes Levi Yitzchak, beginning to do so significantly since his 75th Yahrzeit, on Chof Av 5778.

To date, three volumes have been published (in 5750, 5751 & 5753, spanning Bireishis through Vayikra) and two new volumes are now ready for print: A fourth volume on Bamidbar-Devarim, and a fifth on Tanach & Maamarei Chazal, Horav Levi Yitzchak’s Igros, and commentary on Tanya.

Now, as mentioned, Lahak has announced their initiative to allow every individual to participate in the publishing, for the symbolic sum of $30 in the United States or 100 Shekel in Israel, and to receive the full set of five volumes.

The campaign was announced on Hei Teves, and will conclude on Motzaei Shabbos 28 Teves. The printing will begin on Yud Shevat, and the books will be distributed around Yud Alef Nissan.

Hurry and order your set today for just $30! To order online, log onto: www.lahak.org/sale

Shipping can be selected on the website, and is available throughout Eretz Yisrael and the United States for an additional payment. Group shipments will be sent to Anash centers worldwide: Paris, France, Manchester and London, England, Toronto and Montreal, Canada, and Melbourne and Sydney, Australia.