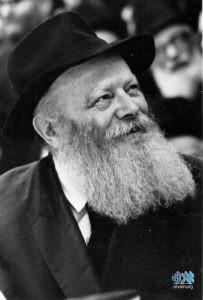 We are pleased to bring you a weekly photo of the Rebbe and a story from The Weekly Farbrengen by Merkaz Anash.

It happened on Rosh Hashana 5702 (1941), just a few months after the Rebbe arrived in the States. We were standing there, tens of chassidim, ready to walk to Prospect Park to preform tashlich.

The Rebbe, then the younger son-in-law, said, “This is not a way to walk to tashlich!”

He split us all up into two long lines, old and young, and led us in song. Thus we marched up the parkway, singing Yiddishe songs, displaying pride to thousands of curious onlookers.

The next year, it was already a minhag. As we marched back, an old bareheaded man rushed over to me, and pointed to his heart. “You know, here I have a spark of Yiddishkeit. When I heard the singing, hurrah, hurrah, that spark burst into a flame!”

This was the first mofes I saw from the Rebbe.