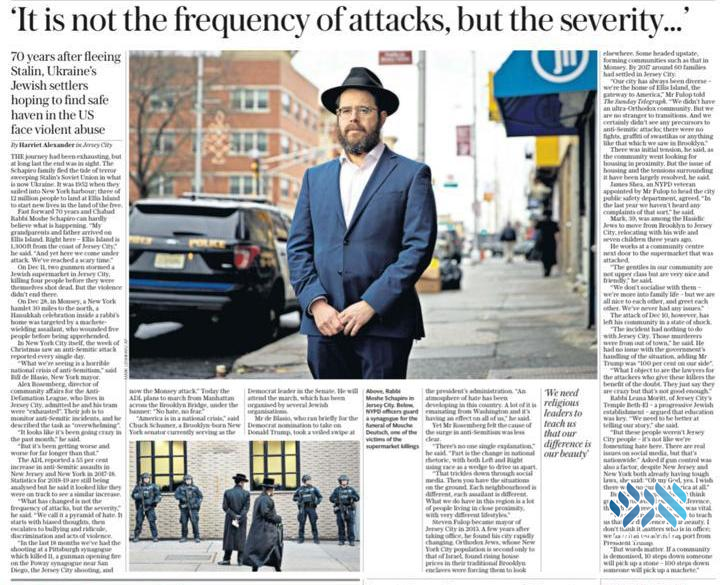 The journey had been exhausting, but at long last the end was in sight. The Schapiro family fled the Soviet Union, running away from the tide of terror sweeping Stalin’s Russia and present-day Ukraine. It was 1952 when they eventually sailed into New York harbor; three people out of 12 million to land at Ellis Island and begin their new lives in the land of liberty and opportunity.

“My grandparents and father arrived on Ellis Island. Where did America welcome these people? Right here – Ellis Island is 1,300 feet from the coast of Jersey City,” he said. “And yet here in Jersey City, we came under attack. We’ve reached a very scary time.”

Last month two gunmen stormed a Jewish supermarket in the New Jersey city, killing four people before they were themselves shot dead. The attack horrified the region, but the violence didn’t end there.

On December 28 in Monsey, a New York hamlet 30 miles to the north, a Hanukkah celebration inside a rabbi’s home was targeted by a machete-wielding assailant, who stabbed five people before escaping, and being swiftly detained.

“America is in a national crisis,” said Chuck Schumer, the Brooklyn-born New York senator, currently serving as the Democrat leader in the Senate.

Mr. de Blasio, who ran a brief campaign for the Democrat nomination to take on President Donald Trump, made a veiled swipe at Mr Trump’s administration.

“An atmosphere of hate has been developing in this country over the last few years. A lot of it is emanating from Washington and it’s having an effect on all of us,” he said.

Yet Mr Alex Rosemberg of the ADL felt the cause of this surge in anti-Semitism was unclear.

“There’s no one single explanation,” he said. “Part of it is the change in national rhetoric, with both Left and Right using race as a wedge to drive us apart.

“That trickles down through social media. Then you have the situations on the ground. Each neighbourhood is different, and each assailant is different. What we do have in this region is a lot of people living in close proximity, with very different lifestyles.”

Steven Fulop became mayor of Jersey City in 2013. A few years after taking office, his city was changing.

Orthodox Jews, whose New York City population is second only to that of Israel, found rising house prices in their traditional Brooklyn enclaves forced them to look for alternatives. Some headed upstate, forming communities such as that in Monsey. By 2017 around 60 families had settled in Jersey City.

“Our city has always been diverse – we’re the home of Ellis Island, the gateway to America,” Mr Fulop told The Sunday Telegraph. “We didn’t have an ultra-Orthodox community. But we are no stranger to transitions. And we certainly didn’t see any precursors to anti-Semitic attacks; there were no juvenile fights, no graffiti of swastikas or anything like that, which we’ve seen in Brooklyn.”

There was initial tension, he said, as the community “displaced from Brooklyn” went looking for housing in close proximity. But the issue of housing tensions has been largely resolved, he said.

James Shea, a NYPD veteran appointed by Mr Fulop as director of the city’s department of public safety, agreed. “In the last year we haven’t heard any complaints of that sort,” he said. “It seemed like a relatively quiet year.”

Mark, 39, was among the Hasidic Jews to move out of Brooklyn and into Jersey City, relocating with his wife and seven children three years ago. He works at the community center next door to the supermarket which was attacked.

“The gentiles in our community are not upper class, but they are very nice and friendly,” he said. “We don’t socialise with them – we’re more into family life – but we are all nice to each other, and greet each other. We’ve never had any issues – not a broken window, no graffiti, nothing.”

The attack of December 10, however, has left his community deeply frightened. “The incident had nothing to do with Jersey City. Those murderers were not from here; they came from out of town.” He had no issue with his government’s handling of the situation, saying that Mr. Trump was “100 per cent on our side”.

“What I do object to is the lawyers for the attackers, who give these killers the benefit of the doubt. They just say they are crazy. To me, that’s not good enough. We need stronger laws.”

The surveillance video of the kosher supermarket attack indicated the market had been deliberately marked, raising the specter that the shooting was another in a growing national pattern of anti-Semitic attack

Rabbi Schapiro doesn’t think that gun control laws would make much difference. His uncle was smashed in the face with a brick in Crown Heights in September. He points out that the Monsey attacker was armed with a machete.

“We need to introduce a moment of silence into every child’s daily routine, to think about what united us. Why we are here, and how we are one people,” he said.

“We also need our religious leaders to teach us that our difference is our beauty. I don’t think it matters who is in office; we have had wonderful support from President Trump.