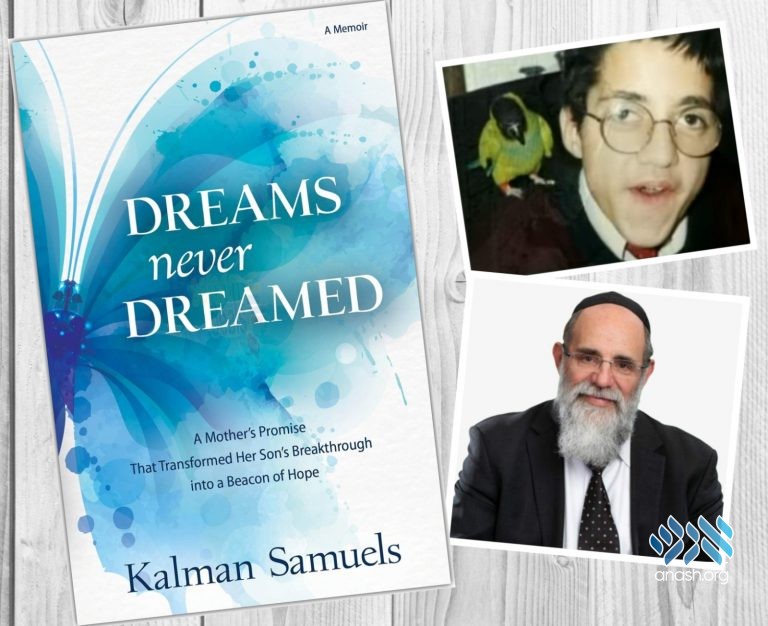 In a new book, Dreams Never Dreamed, about the remarkable journey of raising a blind and deaf son and establishing the Shalva Center for children with disabilities, Kalman Samuels described his memorable visit with the Rebbe.

In 1977, Yossi, the infant son of Kalman and Malki Samuels, was injured and rendered blind, deaf, and acutely hyperactive. During the difficult and isolating years of Yossi’s early childhood, his mother promised to dedicate her life to helping other children with disabilities and their families, if Yossi’s world of darkness and silence would ever be penetrated.

Inspired by their son’s remarkable breakthrough to communication, Kalman and Malki established Shalva, one of the world’s largest centers for disability care and inclusion – creating a better society for all.

The following is an excerpt from Dreams Never Dreamed, in which Kalman Samuels shares their remarkable journey.

By Kalman Samuels via Chabad.org

We didn’t sit back waiting for G‑d’s intervention. Our odyssey to find someone who could help Yossi continued unabated.

There was the “amazing” pediatrician to whom we were referred, whose hands were white because he washed them with a bleach solution every few minutes. Amazing maybe; obsessive-compulsive certainly. He described Yossi’s gait “as if he has a grapefruit between his legs,” and referred us to his uncle, a well-known neurologist in New Rochelle, using his influence to get us an appointment at the uncle’s home the following Sunday morning.

Once again out came the road maps, and I carefully plotted our journey along unfamiliar highways. What may be a simple drive for most people was anything but for a newcomer to New York, driving with a hyperactive, blind, and deaf three-year-old. The doctor was very pleasant, talked about encephalitis, or swelling of the brain, as a possible vaccine reaction, and had nothing practical to suggest.

The search continued and we took Yossi to another leading neurologist, Dr. Myles Behrens. Upon learning that Yossi had been examined by Dr. H., whom he knew, he asked for a written report of her findings. He also referred us to Columbia-Presbyterian for a neuro-pediatric assessment with Dr. Arnold Gold, the granddaddy of neurology in New York.

Dr. Gold was a most impressive individual and examined Yossi very carefully, asking many questions. He sat us down and suggested we hospitalize Yossi for three days for a battery of neurological tests to clarify his condition. I was excited by this opportunity. A world expert wanted to examine my son and finally find out what was wrong. Not so Malki.

There was a pause and then she deferentially asked, “Doctor, after the three days of tests, do you think you’ll be able to help my son?” There was an even greater pause before Dr. Gold replied: “I can’t say whether I’ll be able to help him, but I’ll gather important data about what he has.” Malki then asked, “And doctor, who’ll be doing these tests, you or your students?” Another pause and then: “Well naturally, my associates, some of whom are my students, will be involved – but I’ll be guiding them.” Malki said, “Thank you doctor,” and Dr. Gold was taken aback, realizing that she apparently didn’t intend to do the tests.

I guess most people are like me and would say, “Gee, thanks, that’s great.” Not Malki. What was her objection? I asked her as soon as we left. Her reply was, as usual, succinct. “My Yossi will not be his guinea pig. Yossi may be a fascinating case for research, but he said openly he doesn’t think he’ll be able to help him. So what will I have, his research on my shelf? Can you imagine how many times they’re going to stick Yossi with needles and the different ways they’ll traumatize him without him understanding what is happening? And for what? The doctor doesn’t know if he can help him, but my fear is that it may damage him. Forget it.”

Malki’s words were hard for me to accept. I strongly felt this was an opportunity we couldn’t afford to miss. We would finally know whatever there was to know about Yossi’s condition and could then plan accordingly. How could we not follow through? My respect for the medical profession ran deep. Most of my uncles and cousins were doctors, my lawyer dad being the family exception. When a doctor spoke, my reflex was to agree. Malki had respect but would not allow Yossi to be their pincushion.

Shortly thereafter, Uncle Hershel and Aunt Edie visited on a Sunday afternoon. He incidentally shared that, of late, he had been treating a most interesting patient, an elderly hasidic woman who was the wife of Rabbi Schneerson.

“Rabbi Schneerson?” I asked. “As in the Lubavitcher Rebbe?”

I was amazed at what I was hearing. “So what makes her interesting?” I asked, and he proceeded to explain that she was not only refined and cultured, but also brilliant, and there was just something special about her.

I told Uncle Hershel that I would love to get a blessing from her husband for Yossi, and he immediately said, “No problem. Next time Mrs. Schneerson comes for an appointment, I will ask.”

About a month later, Uncle Hershel called. “Mrs. Schneerson was in earlier and I told her that my nephew would appreciate a blessing from her husband for his sick child. She said she would call me later, and she just did. You are to be there at 3:00 p.m. tomorrow to meet him.”

I couldn’t believe it. I was not a card-carrying member of the Lubavitch hasidic community and had never visited the famous Lubavitch headquarters at 770 Eastern Parkway in Brooklyn, but I had untold respect for the Rebbe’s greatness in all areas of Jewish life. He was one of a kind in his brilliance and in his love for his fellow Jew and fellow human.

I shared the news with an emissary of the Rebbe whom I knew, and he laughed. “Kalman, your uncle may mean well, but the Rebbe is not accepting even his closest people at this time due to a medical issue of his own.”

I felt that we had to at least go through the motions, so the following day I came home from work early and Malki, Yossi, and I made our way to 770.

The street out front was packed with cars and there was no parking, so I told Malki to just stay there double-parked for a few minutes while I went in to size up the situation. I entered and found Rabbi Klein, one of the Rebbe’s secretaries, in a little reception office. I took a deep breath and said in Yiddish, “The Rebbetzin has invited us to have a private meeting with the Rebbe at this time.”

I was ready for hearty laughter. How totally shocked I was when Rabbi Klein responded in Yiddish, “We are aware. The Rebbe has advised us of your coming. We will daven minchah (pray the afternoon service) together with the Rebbe and he will then receive you.” I kindly thanked him and sprinted out to Malki, fumbling for words and sharing with her what had transpired, telling her that I’d go inside with Yossi and she should park the car quickly and then come in too.

There were some one hundred young men and rabbis present for the fifteen-minute afternoon service with the Rebbe. Immediately afterward, we were escorted after him through an adjacent door. We found ourselves standing in a wood-paneled room with a winding wooden staircase in one corner.

The Rebbe welcomed us with a pleasant smile and we entered into conversation. I shared the background of Yossi’s problems, and a couple of minutes into our discussion I mentioned that he was a direct descendant of King David via his mother. The Rebbe fixed a gaze on Malki and neither blinked nor looked away. It was eerie and uncanny. Malki could not look away and break the gaze. Clearly, I was irrelevant and could equally have been on a telephone call outside in the hall.

We spoke about important issues. Most notably we asked the Rebbe for his guidance as to whether we should go forward with Dr. Arnold Gold’s suggestion of hospitalizing Yossi for tests. The Rebbe went on at length and explained that according to Jewish law, we should share this question with two leading medical authorities and ask their opinion. If both concur, he said, then we are obligated to follow their advice. If they do not concur then my Uncle Hershel should guide us.

Finally, after what seemed like endless minutes, the Rebbe broke his gaze and gave Yossi a nickel in his hand. Yossi took three steps and threw it down. We were so embarrassed, but the Rebbe calmly gave Yossi another nickel and told us, “Don’t be concerned, this is a healthy quality in the child.”

After fifteen minutes of being in the presence of this giant, the conversation concluded with the Rebbe asking me to please give his warmest regards to my uncle, Dr. Samuels. He made it perfectly clear as to why we had received such extraordinary attention: it was in gratitude for my uncle’s care.

Malki never quite recovered from what she described as his “blue eyes, deep like the sea.” Years later I noted in the writings of Chabad that when one of their Rebbes stared at an individual, however briefly, it was considered an event of significance, and that the stare was given for a reason, often to give the person the spiritual strength to deal with future challenges. What then can I say about the Rebbe’s extended gaze? In light of unfolding events it was seemingly a gift to enhance Malki’s own vision.

I now turned to Uncle Hershel and asked him to identify two additional medical authorities with whom we could share our question as to whether we should hospitalize Yossi at Columbia- Presbyterian for the battery of tests as I believed, or whether I would have to buckle under. Hershel checked it out and referred us to two neuro-ophthalmologists. They each did a thorough checkup of Yossi in their offices with the latest equipment and both gave similar diagnoses involving vertical nystagmus and atrophy of the optic nerve along with meningitis.

As for our key question, one said to definitely go ahead with the guru Dr. Arnold Gold’s plan, but incredibly the other agreed with Malki. He did not have much hope that hospitalizing Yossi would yield information that would be helpful to him and had to admit that the trauma to such a frail child is not something to be taken lightly.

I questioned him and tried to minimize the impact of his comments, but to my surprise he turned to me and said quietly, “Mr. Samuels, you have an unusually bright wife and her unconventional wisdom is worthy of being listened to.”

To purchase the full book from SeforimDeals.com, click here.