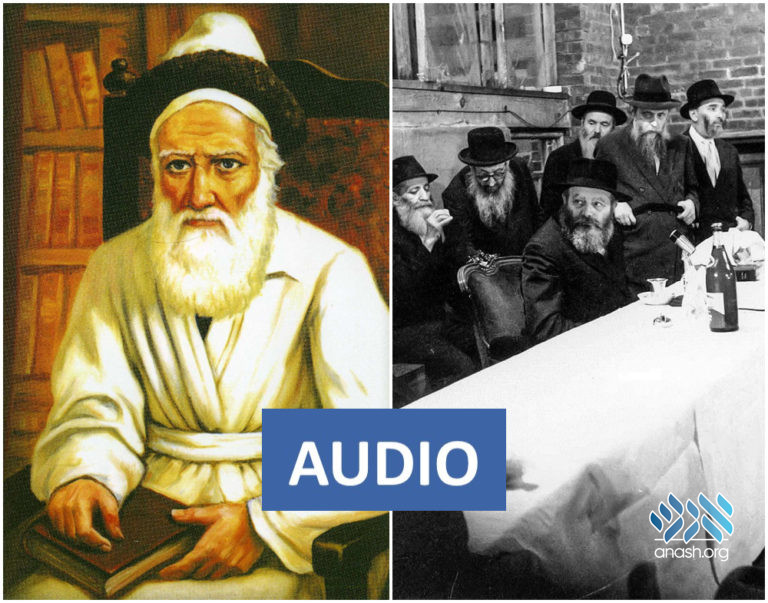 The audio tracks of a special late-night Farbrengen marking 100 years of Histalkus of the Tzemach Tzedek was restored just in time for 13 Nissan.

A unique Motzei Shabbos Farbrengen, held on Yud Gimmel Nissan 5726, the 100th Yahrtzeit of the Tzemach Tzedek, has now been restored by ashreinu.app from the collection of Rabbi Sholom Yisroel ’שיחי Hodakov.

This Farbrengen carries special significance now, as we mark 100 years since the passing of the Rebbe Rashab נ”ע on Beis Nissan.

At the conclusion of the Shabbos Farbrengen, the Rebbe requested that Rabbi Hodakov announce that a Farbrengen would take place on Motzei Shabbos at 11PM.

Amongst many other rare moments, at this Farbrengen the Rebbe said 2 Ma’amorim (כעין שיחה) in succession, beginning the first one at exactly 12:37 AM, the precise moment of the Tzemach Tzedek’s passing 100 years prior.

During the signing of a joyous Niggun the Rebbe stood up to dance in his place, and concluded this rare Farbrengen at 1:30AM.

Following the Farbrengen, a line formed outside the Mazkirus office, where dollars from the Rebbe were being sold to support the newly established קרן המאה. Pictured below is the dollar received by R’ Dovid Raskin ע”ה following the Farberengen. (Credit: Bentzion Pearson)

Transcript of the Farbrengen and 2 Ma’amorim, as well as the letter from Mazkirus regarding קרן המאה, can be read here (Lahak Hanachos).

Restoration sponsored by Zalmy and Sarale Cohen. Much appreciation to Yisrolik Shemtov for his assistance in restoring this audio.

Audio: The recording of the Farbrengen before restoration

Audio: The recording of the Farbrengen after restoration