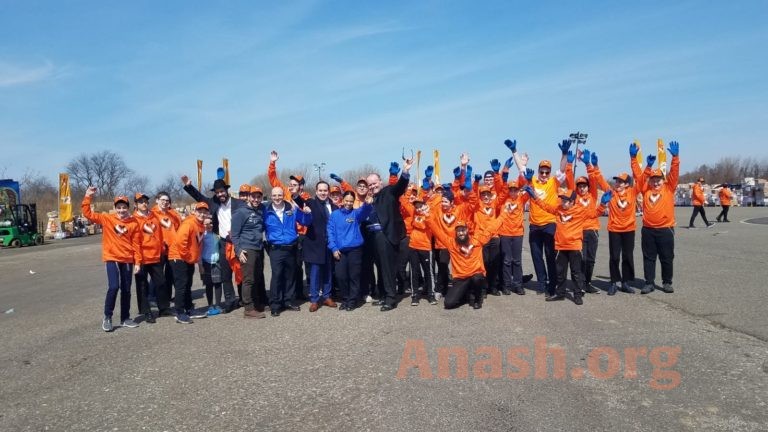 Oholei Torah students volunteer at the Chasdei Lev distribution in a display of appreciation for school Rebbis.

Each year, before Pesach and Sukkos, the Chasdei Lev organization shows gratitude to rebbis from all different communities by providing them with bulk amounts of food, snacks and papergoods.

The program has been in place for over a decade before it was brought to Chabad by Igud Hamelamdim teachers’ association, directed by Rabbi Avrohom Bluming. Rebbis, from all different communities, pay only a fraction of the full cost, while the rest is covered by Chasdei Lev and Igud Hamelamdim. Hundreds of volunteers show up to load the rebbis’ cars and to say “Thank you.”

This year, a group of students from Oholei Torah’s eighth grade joined the volunteer team. Led by Rabbi Yossi Bryski and their talmidim hashluchim, they worked hard and made a good representation of Lubavitch. Organizers played Lubavitcher niggunim in their honor and the boys danced with enthusiasm.

Visiting melamdim were elated by the appreciation they were shown and the genuine words of thanks. As one melamed said, “It’s thankfulness such as this that keeps us upbeat year-round.”