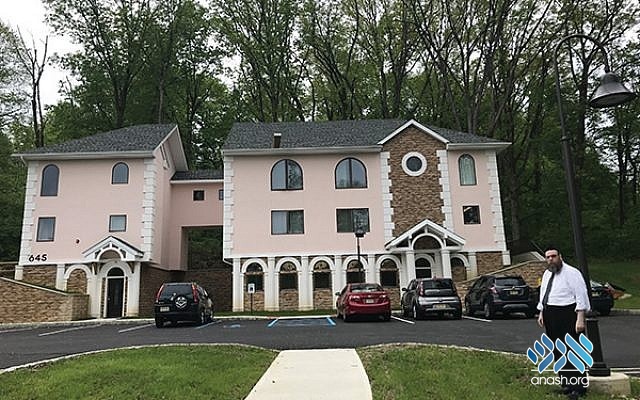 By Michele Alperin for NJJN

Rabbi Dovid Dubov of Chabad of Princeton estimates he spends 70 percent of his time on the road. He visits Jewish residents of nursing homes and prisons, and learns with graduates of Chabad’s Hebrew school, which goes from first through eighth grade. He’s in touch with around 50 former students and tries to catch a few minutes with them on a regular basis to learn the week’s Torah portion, speaking to them by phone in airport lounges, highway rest stops, or in their homes.

When he finally returns home late at night it’s to the new Chabad of Princeton/Headquarters-Chabad of Greater Mercer County, which opened last spring on Route 206 in Princeton.

The new space includes a sanctuary for Shabbat- and Sunday-morning prayers, a mikvah, and four classrooms (two of which are multipurpose rooms) for Hebrew school students and Friendship Circle activities, a program for children with special needs and their families.

“Our next project is to develop a beautiful campsite” for the Chabad day camp, Camp Gan Israel, Dubov said.

The opening celebration for the center will be held Sept. 22 at Chabad’s Gala Community Dinner.

Princeton Chabad, founded by Dubov in 1991, previously served the Jewish community from the rabbi’s residences, first on Hamilton Avenue and then on Route 27.

“A great miracle” happened in August 2004, according to Dubov, when Chabad Lubavitch of Mercer County bought 18-and-a-half acres on Route 206 for $1.6 million. In an email to NJJN, Dubov said it was an act of God because he had sought a larger space “to have a greater impact on the community,” but it was difficult — and time consuming — to find a parcel of land that satisfied strict zoning laws.

Experienced synagogue architect David Cohen, principal at DEC Architect and a member of Temple Beth-El in Hillsborough, was employed to work on the building’s design. However, the 2008 financial crisis forced a five-year hiatus on their plans. “Many donors felt we should wait until [the] economy heals,” Dubov emailed NJJN.

The three-story pink structures are connected by a second-floor bridge. The ground floor of the left-hand building houses the mikvah, with dressing rooms on either side. The mikvah’s walls are marble, donated by Stone Tech Fabrication in Trenton.

“The nice thing about marble is that it is a single sheet, with few seams, so you don’t have to worry about mildew growing in the seams the way you would with smaller tile material,” Cohen said.

Guest bedrooms for shomer Shabbat visitors are on the second floor and Dubov’s office is located on the third.

The second, and larger, building houses a commercial kitchen on the ground floor and a multipurpose room that serves as a synagogue — the ark is decorated with Jerusalem stone —and activity space. The building also includes a bridal suite, offices, and an apartment for the Dubovs. Their eight children are grown and don’t live at home; five are married and the Dubovs have 10 grandchildren.

There are five other Chabad centers in nearby towns in Mercer County, including one at Princeton University and one at the College of New Jersey, all under the auspices of Chabad of Princeton. The Rabbinical College of America in Morristown, which oversees Chabad in New Jersey, appointed Dubov to oversee Chabad Lubavitch of Greater Mercer County.

“One of my biggest goals is to reach unaffiliated Jews,” said Dubov. “From my experience I can tell you that in Mercer County there are thousands of families waiting to be serviced.”

“People laughed,” according to Dubov, when his son-in-law and daughter, Rabbi Yaakov and Chana Chaiton, opened the Chabad house in Robbinsville in 2014. But 50 people in Robbinsville attended their seder this Passover. “There are so many Jews you don’t even know about,” he said.

Dubov welcomes everyone to his Princeton center, which is supported by charitable donations.

“We believe a Jew is a Jew — we’re 100 percent nonjudgmental,” he said. “We accept all Jews. Our goal is to bring them one step closer to their identity and their golden heritage.”

“Our goal is that every Jewish kid and their parents, like on Sinai, hear the [Ten] Commandments,” he said.