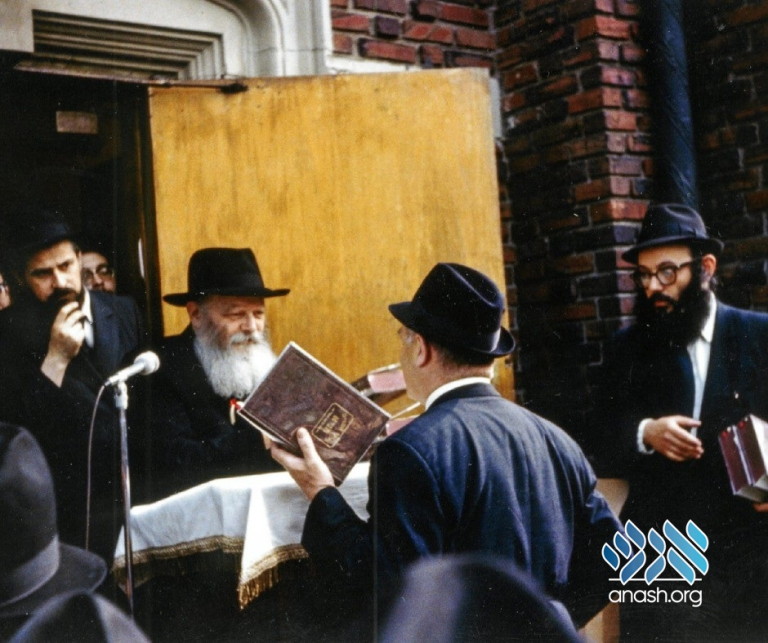 On Tes Zayin Sivan 5735/1975, the Rebbe held a surprise farbrengen outside 770 for the English delegation that had come for Shavuos. Following a short sicha, the Rebbe distributed a signed Tanya to each guest.

Here, we bring you an excerpt from Reb Zalmon Jaffe’s memoirs recounting the events of the day.

Rabbi Leibel Groner reminded me (not that I required reminding) that the Rebbe had promised to give out the specially autographed Tanya at 5:00 p.m. In the Rebbe’s answer to me, he had indicated that he would present these “outside” right before we left. Everyone assumed this meant outside the Rebbe’s room.

We also hoped that after the presentation, the Rebbe would come outside to the front door and give us all a grand send-off as we left for home. Last year the Rebbe had stood on the steps of 770, clapping his hands in time to the singing, while we (and some yeshiva students) danced around. At the height of these proceedings we boarded our cars and left. We were hopeful for similar treatment today, but we did understand that this may be wishful thinking. We still arranged for all of our cars to be lined up outside 770, ready to leave – just as they were last year.

At 4:30 there was suddenly a great hive of activity at the main entrance of 770. The Rebbe’s shtender (podium) was brought out and placed right in front of the main doorway of 770. A microphone was also set up. Leibel Groner rushed up to us with new instructions. The Rebbe would be holding a farbrengen outside – in the open air!

All the men and boys should form a line at the right-hand side of the walkway facing the Rebbe. Later, after each out of town guest would receive “something” from the Rebbe, they would make a complete turnaround, walk back down the other side of the walkway and enter a car.

I suggested that Roselyn and one or two friends take up positions on the left (empty) side of this walkway. In a flash, all the women had joined them – so we now had the men lined up on the right and the ladies on the left of this narrow path. Surrounding the passengers – from all sides – were hundreds of yeshiva students. They were standing on the lawns, walls, pavement, streetlamps and on the roadway.

Meanwhile, Leibel brought out boxes containing some of the seventy-four Tanyas. He extracted a few books and took them into the Rebbe’s room.

A few minutes later there was a “shush” and a “hush” and then complete silence; here was the Rebbe. He was followed by Leibel, who was carrying six of these Tanyas. After him came Rabbis Chodakov, Klein, Wineberg, Harlig and Dr. Nissen Mindel and others. These gentlemen grouped themselves behind the Rebbe. The first open-air farbrengen had just begun. On certain occasions, the Rebbe addresses the children outside 770, such as at the Lag B’omer parades; but as far as I can ascertain, this was the first farbrengen held outside under the open sky.

What a happy knack the Rebbe has of doing the right thing at the right time. It was a brilliant occasion, matching the brilliant sunshine of a beautiful day. A sparkling, scintillating mini-farbrengen! The women, in particular, were absolutely delighted. It was the first time they could see and hear the Rebbe as clearly and as well as the men. Roselyn and Hindy were just as close to the Rebbe as I was.

The Rebbe delivered a five-minute sicha. Rabbi Groner – who had been holding the four signed Tanyas plus two additional copies – then placed the Tanyas on the Rebbe’s podium.

Roselyn later told me that this short sicha was the first time that she could hear and understand this much of a sicha. Lipa Brennan explained that for certain audiences, the Rebbe may not intersperse his remarks with as much Hebrew or Talmudic language as he otherwise does.

I had given my camera to a friend, before the Rebbe arrived, with instructions that he take as many photographs as possible of the Rebbe handing out the Tanyas, a view of the crowds and of the overall scene. The Rebbe was now giving us a most wonderful opportunity to take some good photographs; just as I had requested at our yechidus!

The Rebbe announced that he would first distribute the Tanya “to those who were involved in the publication of the translated Tanya, followed by the rest of those assembled here.”

The Rebbe then signaled to me with his eyes – and how eloquent are the Rebbe’s eyes! – to come forward. I walked up to the Rebbe’s podium.

The Rebbe handed me a Tanya, saying, “Zol zain b’hatzlocha rabbo.” ([Everything] should be with much success.)

While I was still face to face with the Rebbe, I delivered a message that “the British contingent have requested me to ask the Rebbe that Moshiach be revealed soon and speedily!” “Yes, if you can accelerate it,” replied the Rebbe.

At this moment, when the Rebbe answered not only verbally but with a gorgeous smile, Louis Tiefenbrun took a most superb and marvelous photograph of the Rebbe surrounded by a group of his most trusted and able lieutenants.

Scores of others also managed to take some wonderful photographs and Louis took quite a few himself too, but that one – in particular – I consider a masterpiece. Louis had this enlarged and laminated and I have since seen it in dozens of households. One cannot see my face, but I am positive that by now I have the most famous neck in Lubavitch!

I was told that Louis’s two sons sold these pictures in sets of six. They made enough money to pay their fare to the Rebbe and to buy a pair of tefillin, each!

Nachman was next to receive his autographed Tanya, followed by Bernard and Hershel. Meanwhile, being back in my spot, I surreptitiously opened the cover of my Tanya. Yes – there it was – in Hebrew, of course – the Rebbe’s own handwritten inscription. There was also a photocopy of a compendium of the various sichas about the Tanya the Rebbe had delivered during this visit.

I was thrilled, delighted, and overwhelmed with gratitude to the Rebbe. It had been worthwhile “bothering the Rebbe” to do this. Hershel had argued with me on many occasions that it was not fair of me to pester the Rebbe to sign the Tanyas. I had remonstrated with him. I pointed out this was very important to me, but to my children’s children it would be more important still, a treasured heirloom.

The Rebbe presented a Tanya to Rabbi Chaim Farro and one to Mendel Katsch and then to every adult male traveler who lived in an English-speaking country. The Rebbe repeatedly called out, “Who else is there from English countries? Other countries that speak English? Anyone else from England, Australia?” The Rebbe also called up a few individuals by name.

Each male traveler who did not live in an English-speaking country and all boys – even babies like my grandson Sholom Ber Lew, who was only 15 months old! – received a pocket (Hebrew only) Tanya from the Rebbe’s hand.

The Rebbe announced that each woman and girl – even little girls (like my granddaughters Zelda Rochel and Chana Lew, aged two and four years respectively) – would receive two single-dollar bills, one for charity and the other toward the Shabbos candle-lighting campaign. The Rebbe then called over Rabbi Wineberg and handed him a wad of the bills for him to distribute to the women.

The Rebbe called up Shmuel a second time, and gave him his own (the Rebbe’s) original copy of the sicha of the Rebbe’s remarks about the Tanya, with the Rebbe’s own handwritten additions and alterations. The Rebbe told him “Machen a fotostat in Eingland un opshiken tzurik.” (Make a photocopy in England and send it back.) Not only did Shmuel make one copy of this sicha, but he had it printed and sold them with the proceeds going toward the Neshek campaign.

I approached the Rebbe and asked for a Tanya for Avrohom, who was also a member of the Tanya committee but who was in England.

“[But] he is not here!” responded the Rebbe. The Rebbe did give me a pocket Hebrew-only Tanya for him “as commission.”

The Rebbe called me up again (with his eloquent eyes) and handed me a Tanya for Chief Rabbi Jacobovits of England, together with a personal letter for him. The Rebbe (again) instructed that a delegation present this Tanya to the Chief Rabbi. The Rebbe also gave me an extra Tanya for the airplane home, “In case you find someone who might need one.”

The Rebbe concluded this glorious affair by wishing us all “Furt gezunterheit, zol zein besuros tovos (have a safe journey and there should be good news).” With the Rebbe clapping and encouraging the singing of “Ki B’simcha,” off we went to board our vehicles. Our motorcade moved off. We all waved furiously, singing lustily to the Rebbe, who was still standing on the steps of 770, clapping his hands and giving us a farewell brocha.

On the plane going home, Shmuel searched and found the lost soul to give the Rebbe’s Tanya to as instructed. Someone (from our own group of passengers) had gone directly to the airport. He was not aware of the “outdoor” farbrengen and distribution. He would have been most disappointed to have missed receiving a Tanya from the Rebbe’s hand; but the Rebbe notices everything!

One of our committee members was very disappointed when he noticed that his Tanya was not signed by the Rebbe! I could hardly believe it. It seemed impossible, but I looked inside and it was true. It turned out that someone else mistakenly had taken his Tanya.

We arrived home tired, but still basking in the warmth of a glorious two weeks spent with the Rebbe.